Items related to The World of George Washington

The World of George Washington 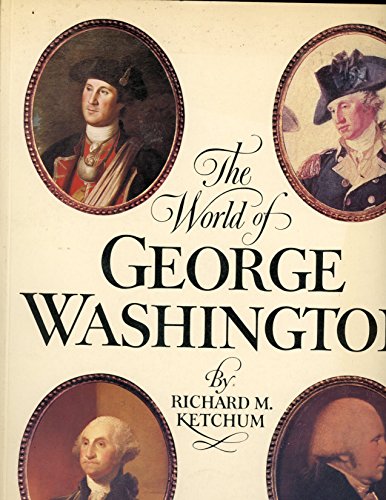 From the cover: Frontiersman, general, statesman, president, aristocrat, gentleman, farmer -- Washington was all of these things and more. Richard Ketchum, the renowned Revolutionary historian, has peeled away two centuries of apocryphal stories, finally revealing the man behind the legend. The World of George Washington truly re-creates the age Washington lived in. Every painting and piece of memorabilia that appears between these covers were in existence during Washington's lifetime. Here are portraits painted by the men he sat for, the maps he read, the mess kit he carried, the pictures he looked at, and the surveying instruments he used. And the narrative that they accompany has been drawn from the eyewitness accounts of men and women who knew this extraordinary man. This is Washington before the myths began: a man still controversial enough to provoke John Adams into complaining that he was "too illiterate, unread, unlearned for his station and reputation." Yet the young Lafay

Book Description Random House Value Publishing. Paperback. Condition: Good. A copy that has been read, but remains in clean condition. All pages are intact, and the cover is intact. The spine may show signs of wear. Pages can include limited notes and highlighting, and the copy can include previous owner inscriptions. At ThriftBooks, our motto is: Read More, Spend Less. Seller Inventory # G051755349XI3N00

2. The World of George Washington

Book Description Random House Value Publishing 1984-09-11, 1984. Paperback. Condition: Good. Item is in good condition. Some moderate creases and wear. This item may not come with CDs or additional parts including access codes for textbooks. Might be an ex-library copy and contain writing/highlighting. Seller Inventory # DS-051755349X-3

4. The World of George Washington

5. The World of George Washington

6. World (The) of George Washington