Items related to Jimi Hendrix: Inside The Experience

Jimi Hendrix: Inside The Experience 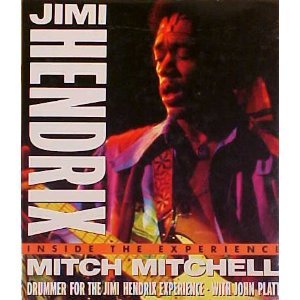 The drummer of Hendrix's band recounts the years of the rock legend's creativity, the London club scene where he honed his craft, and the San Francisco hippie scene where he found his following

YA--First published in Great Britain, this oversized, colorfully illustrated book focuses on the last four years of Jimi Hendrix's professional life. Before he died in 1970, he treated the world to some of the best guitar playing and in terpretations of music the rock-and-roll world had ever heard, according to the author. Mitchell, drummer for the group the Experience, tells what it was like to be connected to and learning from a master. While he does give de tails of his own life, most of the data concerns Hendrix. Included are "Set Lists" that list the music recorded and played at different concerts and ses sions, and a tour itinerary that lists con certs, club dates, television appear ances, and other significant dates from 1966 to October 1970. Students inter ested in rock-and-roll trivia will enjoy this book.
-Pat Royal, Crossland High School, Camp Springs, MD
Copyright 1991 Reed Business Information, Inc.

1. Jimi Hendrix: Inside The Experience

2. Jimi Hendrix: Inside The Experience

5. JIMI HENDRIX: INSIDE THE EXPERIE