Four Complete Dr. Fell Mysteries: To Wake the Dead / The Blind Barber / The Crooked Hinge / The Case of the Constant Suicides 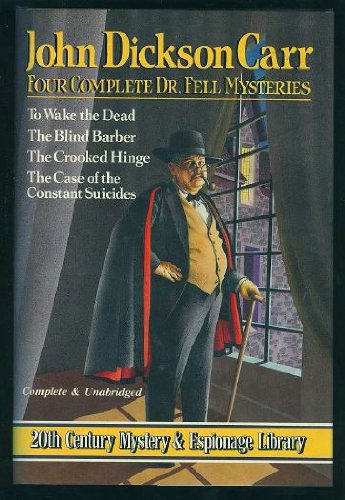 John Dickson Carr (1906-1977) was an American author of detective stories who lived most of his life in England. Carr is generally regarded as one of the greatest writers of so-called "Golden Age" mysteries, complex, plot-driven stories in which the puzzle is paramount. He was influenced in this regard by the works of Gaston Leroux and by the Father Brown stories of G. K. Chesterton. He was a master of the locked room mystery, in which a detective solves apparently impossible crimes. He was most famous for his 23 Dr. Fell mysteries. He was also a pioneer of the historical mystery. Dr. Gideon Fell is described as a corpulent man with a moustache who wears a cape and a shovel hat and walks with the aid of two canes. He is frequently described as bringing the spirit of Father Christmas or Old King Cole into a room. In his early appearances he was introduced as a lexicographer but this description gradually disappeared and he was thereafter mostly referred to as working on a monumental history of the beer-drinking habits of the English people. He is an amateur sleuth, frequently called upon by the police, whom he frustrates in the usual manner of most fictional detectives by refusing to reveal his deductions until he has arrived at a complete solution to the problem. Most of Fell's exploits concern the unraveling of locked room mysteries or of "impossible crimes". When he himself becomes frustrated, he is likely to cry out, "Archons of Athens!" Dr Fell is supposedly based upon G. K. Chesterton (author of the Father Brown stories), whose physical appearance and personality were similar to those of Doctor Fell. This omnibus contains the complete and unabridged texts of four of the original Dr. Fell editions: To Wake the Dead (1937), The Blind Barber (1934), The Crooked Hinge (1938), and The Case of the Constant Suicides (1941).

1. Four Complete Dr. Fell Mysteries: To Wake the Dead / The Blind Barber / The Crooked Hinge / The Case of the Constant Suicides

4. Four Complete Dr. Fell Mysteries: To Wake the Dead / The Blind Barber / The Crooked Hinge / The Case of the Constant Suicides