Items related to Self and Self-Management (Collected Works of Arnold...

Self and Self-Management (Collected Works of Arnold Bennett : Vol 73) 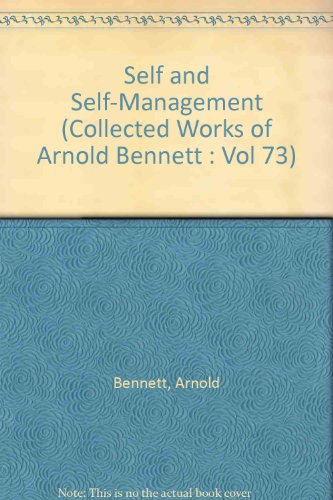 This book was originally published prior to 1923, and represents a reproduction of an important historical work, maintaining the same format as the original work. While some publishers have opted to apply OCR (optical character recognition) technology to the process, we believe this leads to sub-optimal results (frequent typographical errors, strange characters and confusing formatting) and does not adequately preserve the historical character of the original artifact. We believe this work is culturally important in its original archival form. While we strive to adequately clean and digitally enhance the original work, there are occasionally instances where imperfections such as blurred or missing pages, poor pictures or errant marks may have been introduced due to either the quality of the original work or the scanning process itself. Despite these occasional imperfections, we have brought it back into print as part of our ongoing global book preservation commitment, providing customers with access to the best possible historical reprints. We appreciate your understanding of these occasional imperfections, and sincerely hope you enjoy seeing the book in a format as close as possible to that intended by the original publisher.

Enoch Arnold Bennett, the son of a solicitor, was born in Hanley, Staffordshire in 1867. He was educated locally and at London University, before working initially as a solicitor's clerk, but soon turned to writing popular serial fiction and editing a women's magazine. After the publication of his first novel, 'A Man from the North' in 1898 he became a professional writer and some of his best and most enduring and acclaimed work, including 'Anna of the Five Towns', 'The Old Wives' Tale', 'Clayhanger', 'The Card' and 'Hilda Lessways' followed over the next twelve years. Soon after the outbreak of the First World War, Bennett was invited to join the War Propaganda Bureau, concerned with finding ways of best promoting Britain's interests. He was in good company, as others who contributed to this effort included Conan Doyle, John Masefield, G. K. Chesterton, Sir Henry Newbolt, John Galsworthy, Thomas Hardy, Rudyard Kipling, Gilbert Parker, G. M. Trevelyan and H. G. Wells. Bernard Shaw knew nothing of the Bureau, but attacked what he believed to be jingoistic articles and poems being produced by British writers. Bennett was the one chosen to defend their actions. He served on a War Memorial Committee at the invitation of the then Minister of Information, Lord Beaverbrook, and was also appointed director of British propaganda in France. His spells in Paris added to his reputation as a man of cosmopolitan and discerning tastes. After the War he inevitably returned to writing novels and also became a director of the 'New Statesman'. Bennett's great reputation is built upon the success of his novels and short stories set in the Potteries, an area of north Staffordshire that he recreated as the 'Five Towns'. 'Anna of the Five Towns' and 'The Old Wives' Tale' show the influence of Flaubert, Maupassant and Balzac as Bennett describes provincial life in great detail. Arnold Bennett is an important link between the English novel and European realism. He wrote several plays and lighter works such as 'The Grand Babylon Hotel' and 'The Card'. Arnold Bennett died in 1931.

1. Self and Self-Management (Collected Works of Arnold Bennett : Vol 73)

Book Description Ayer Co Pub, 1976. Condition: Good. Former Library book. Shows some signs of wear, and may have some markings on the inside. Seller Inventory # GRP69871289

2. Self and Self-Management (Collected Works of Arnold Bennett : Vol 73)

Book Description Ayer Co Pub, 1976. Condition: Good. Shows some signs of wear, and may have some markings on the inside. Seller Inventory # GRP75083841

3. Self and Self-Management (Collected Works of Arnold Bennett : Vol 73)