Items related to World within World: The Autobiography of Stephen Spender

Spender, Stephen World within World: The Autobiography of Stephen Spender

World within World: The Autobiography of Stephen Spender 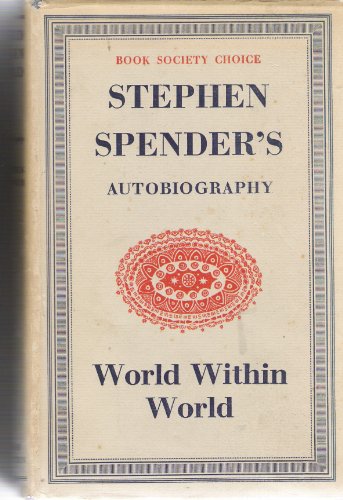 "In this book I am mainly concerned with a few themes: love; poetry; politics; the life of literature....I believe obstinately that, if I am able to write with truth about what has happened to me, this can help others....In this belief I have risked being indiscreet, and I have written occasionally of experiences which seem strange to me myself, and which I have not seen discussed else-where." So begins Stephen Spender's autobiography, widely acclaimed as the twentieth century's greatest memoir.

Spender was one of his generation's most celebrated poets, a writer living at the intersection of literature and politics in Europe between the two world wars. His portraits of his friends—Virginia Woolf, T. S. Eliot, W. H. Auden,
W. B. Yeats, and Christopher Isherwood—render a romantic world of literary genius. Spender uses a poet's language to create an honest and tender exploration of amity and the many possibilities of love. First published in 1951, World Within World simultaneously shocked and bedazzled the literary establishment for its frank discussion of Eros in the modern world.

Out of print for several years, this Modern Library edition includes a new Introduction by the critic John Bayley and an Afterword Spender wrote in 1994 describing his reaction to the charges that David Leavitt plagiarized this autobiography in a novel.

"World Within World is without any question the best autobiography in English written in the twentieth century."
--John Bayley, from his new Introduction

"Superb...[Spender's] best writing charges us with his own best qualities: the moral earnestness, the lucid piety, the lyrical intelligence."
--The New York Times Book Review

Stephen Spender (1909-1996) was one of the most prominent poets of the twentieth century, part of the generation of writers that produced Auden, Eliot, and Isherwood. His most notable books are The Temple, The Collected Poems, and what is now considered his masterpiece, World Within World.