Items related to Familia: Migration and Adaptation in Baja and Alta...

Familia: Migration and Adaptation in Baja and Alta California, 1880-1975 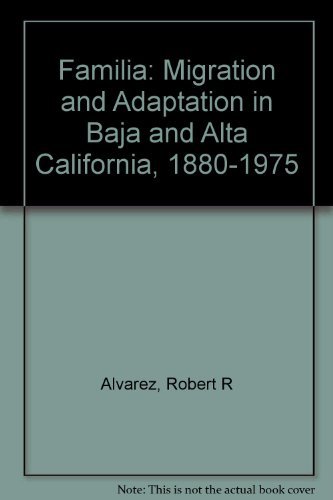 Anthropologists, historians, and sociologists will find here a striking challenge to accepted explanations of the northward movement of migrants from Mexico into the United States. Alvarez investigates the life histories of pioneer migrants and their offspring, finding a human dimension to migration which centers on the family. Spanish, American, and English exploits paved the way for exchange between Baja and Alta California. Alvarez shows how cultural stability actually increased as migrants settled in new locations, bringing their common values and memories with them.

An interesting study that concentrates on the human aspects of migration over generations. Alvarez, an anthropologist, denies that Baja Californians migrated to the United States for solely economic reasons. Rather, they followed a centuries-old "regional-familial" tradition of northward movement. The process did not break down family structure, but instead strengthened it through development of an extended kinship network. Alvarez's reference to individuals and families, including his own, make this an unusual and persuasive volume. The major portion deals with the late 19th through mid-20th centuries; contains useful genealogical diagrams; and is buttressed by extensive oral interviews. Recommended for academic and special libraries. Roy H. Tryon, Delaware State Archives, Dover
Copyright 1987 Reed Business Information, Inc.

2. Familia Migration and Adaptation in Baja and Alta California, 1880-1975

Book Description University of California Press, 1987. Hardcover. Condition: GOOD. Has little wear to the cover and pages. Contains some markings such as highlighting and writing. Supplemental materials are not guaranteed with any used book purchases. Seller Inventory # 0520055470_abe_gd