Items related to A Shield in Space? Technology, Politics, and the Strategic...

A Shield in Space? Technology, Politics, and the Strategic Defense Initiative (Global Conflict and Cooperation) 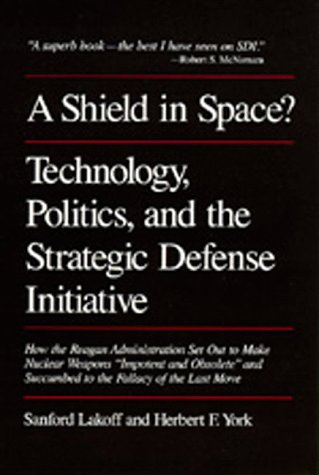 In March 1983, Ronald Reagan made one of the most controversial announcements of his presidency when he called on the nation's scientists and engineers to develop a defensive shield so impenetrable as to make nuclear weapons "impotent and obsolete."

This book provides the first comprehensive review and evaluation of the project launched to implement that announcement —the project officially known as the Strategic Defense Initiative and more popularly as "Star Wars." The authors—a political scientist and a physicist who has played a key role in developing military technologies—provide an intriguing account of how political rather than technical judgment led to the initial decision, and they explain the technical issues in terms accessible to nonspecialists.

Judging SDI as "a classic example of misplaced faith in the promise of technological salvation," the authors examine the implications of the program for strategy, arms control, the unity of the Western alliance, its prospective economic impact, and the way the American political process has dealt with all these issues.

"A superb book—the best I have seen on SDI."—Robert S. McNamara

"This book provides as excellent a technological background to SDI as one could find anywhere."—Baron Solly Zuckerman, former British Defense Science Advisor

"A superb book (the best I have seen on SDI." (Robert S. McNamara)

1. A Shield in Space? Technology, Politics, and the Strategic Defense Initiative (Global Conflict and Cooperation)