Items related to Poems for the Millennium: The University of California...

Poems for the Millennium: The University of California Book of Modern and Postmodern Poetry, Vol. 1: From Fin-de-Siecle to Negritude

Poems for the Millennium: The University of California Book of Modern and Postmodern Poetry, Vol. 1: From Fin-de-Siecle to Negritude 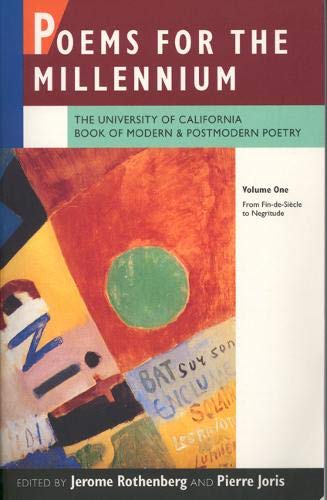 As we come to the end of the century, the entire vista of modern poetry has dramatically changed. Poems for the Millennium captures the essence of that change, and unlike any anthology available today, it reveals the revolutionary concepts at the very heart of twentieth-century poetry. International in its coverage, these volumes depart from the established poetic modes that grew out of the nineteenth century and instead bring together the movements that radically altered the ways that art and language express the human condition.

The first volume offers three "galleries" of individual poets—figures such as Mallarmé, Stein, Rilke, Tzara, Mayakovsky, Pound, H.D., Vallejo, Artaud, Césaire, and Tsvetayeva. Included, too, are sections dedicated to some of the most significant pre-World War II movements in poetry and the other arts: Futurism, Expressionism, Dada, Surrealism, Objectivism, and Negritude. The second volume will extend the gathering to the present, forming a synthesizing, global anthology that surpasses other collections in its international scope and experimental range.

Poet-editors Jerome Rothenberg and Pierre Joris provide informative and irreverent commentaries throughout. They challenge old truths and propose alternative directions, in the tradition of the revolutionary manifestos that have marked the art and poetry of the twentieth century. The result is both an essential source book for experiencing the full range of this century's poetic possibilities and a powerful statement on the future of poetry in the millennium ahead.

"The word 'anthology' hardly does justice to Rothenberg and Joris's brilliant reconceptualization of twentieth-century poetry in a global context. This is that rare book that forces us to rethink what the poetic is and can be."—Marjorie Perloff

"This book is destined to become a fundamental resource for the study of twentieth-century literature and culture. Its importance cannot be overstated."—Charles Bernstein

"A much broader, much more intelligent sweep, this anthology, than most."—Amiri Baraka

"A riveting literary achievement of phenomenal scope and generosity. Kudos to Rothenberg and Joris for their passionate, discerning editorship, spanning cultures, sensibilities, and languages. This illuminating compendium displays the best of humanity's bardic inheritance and vision. It should be obligatory reading for all scholars, students, writers and lovers of poetry. May the wisdom in these poems benefit us all."—Anne Waldman, Jack Kerouac School of Disembodied Poetics, The Naropa Institute

"Looking back from this end of the century we can begin to see how partial our views of its literary happenings have been: how time-bound, tongue-bound, often celebrity-bound. In an accurately titled Poems for the Millennium we can at last sense the scope of the Revolution of the Word that's been in process since—oh, 1895. There's no other anthology like this one, no other overview so venturesome."—Hugh Kenner

"This is not like any other anthology, not a collection of excellences, no absurd imitations of a canon. It's more like a Handbook of Inventors and Inventions, or of Explorers and Discoveries, that opens up all sorts of pathways for poetry from its past and future to a living present. A truly international book of modern poetry that exceeds its claims to move from the fin de siècle to the poets of Negritude, as it crosses frontiers of language and culture and genre. This may be the only collection of modernist poetry that reveals its simultaneous connections to an archaic and ecological past as well as a technological future, as it also wipes out rigid distinctions between poets and painters and sculptors and performers. It is above all a book of possibilities and invitations.—David Antin

"The intermingling circles of poetries and cultures move outward to continents and also open up to all times. True cosmopolitanism loves the specifics of little places and small societies—just the right gesture, the precise quaver of the voice, the exact variety of maize. Rothenberg and Joris's anthology gives us, by virtue of its organic structure and inspired choices, the possibility of a kind of situated internationalism, what 'modernism' half wanted to become. This is a presentation of a poetics that is already here, but imperfectly recognized. It is a sourcebook for the future."—Gary Snyder

"The word anthology hardly does justice to Rothenberg and Joris's brilliant reconceptualization of twentieth-century poetry in a global context. This is that rare book that forces us to rethink what the poetic is and can be." (Marjorie Perloff)

1. Poems for the Millennium: The University of California Book of Modern and Postmodern Poetry, Vol. 1: