Items related to Making Modernism: Picasso and the Creation of the Market...

FitzGerald, Michćl C. Making Modernism: Picasso and the Creation of the Market for Twentieth-Century Art

Making Modernism: Picasso and the Creation of the Market for Twentieth-Century Art 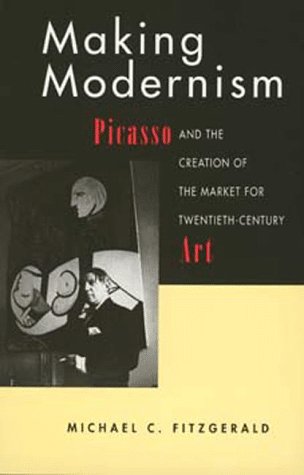 Artists don't achieve financial success and critical acclaim during their lifetimes as a result of chance or luck. Michael FitzGerald's assiduously researched book documents Picasso's courting of dealers, critics, collectors, and curators as he established his reputation during the first forty years of the twentieth century. FitzGerald describes the care, patience, and resourcefulness invested by Paul Rosenberg, Picasso's dealer and close collaborator from 1918 to 1940, in building the financial value and public acceptance of Picasso's art. The book is based on and quotes generously from previously unpublished correspondence between Picasso and dealers, collectors, and museum curators.

Michael C. FitzGerald is Associate Professor of Fine Arts at Trinity College. He was a principal in the department of Impressionist Painting at Christie's New York art auction house and earned an MBA at Columbia upon completing his Ph.D. in art history. He has written for Art in America, Vogue, Apollo, Art and Auction, and ARTnews.

An art historian with an M.B.A., Fitzgerald is intrigued with the financial aspects of the art world. Working from a cache of correspondence between Picasso and his dealers and various curators, collectors, and critics, Fitzgerald reveals how crucial the business angle was to the establishment of modern art in general and to Picasso's phenomenal international success in particular. Fitzgerald focuses on the years between the two world wars when Picasso worked closely with two dealers, Georges Wildenstein and Paul Rosenberg. Fitzgerald characterizes Picasso's relationship with Rosenberg, the more conspicuous of the two, as an "intense collaboration" and contends that it "stimulated" Picasso's art as much as it secured his reputation. Picasso was pragmatic when it came to money, even stating that his shift from the Blue to the Rose period reflected the "spiritual tranquility" of material comfort. Fitzgerald also examines, in uncommon detail, the roles Jean Cocteau, patron Eugenia Errazuriz, Andre{‚} Breton, and Alfred Barr played in elevating Picasso to heretofore unknown levels of artistic fame and profit. The truth is, modern art had to make it big in the marketplace to survive. Donna Seaman

1. Making Modernism: Picasso and the Creation of the Market for Twentieth-Century Art FitzGerald, Mich?l C.

2. Making Modernism: Picasso and the Creation of the Market for Twentieth-Century Art FitzGerald, Mich??l C.

3. Making Modernism: Picasso and the Creation of the Market for Twentieth-Century Art