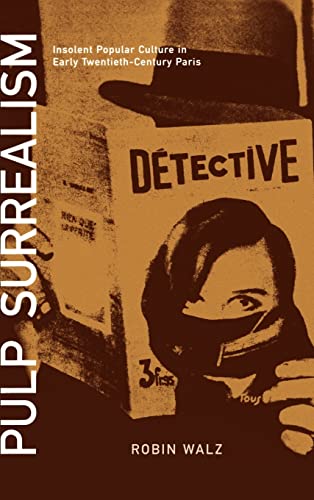 In addition to its more well known literary and artistic origins, the French surrealist movement drew inspiration from currents of psychological anxiety and rebellion running through a shadowy side of mass culture, specifically in fantastic popular fiction and sensationalistic journalism. The provocative nature of this insolent mass culture resonated with the intellectual and political preoccupations of the surrealists, as Robin Walz demonstrates in this fascinating study. Pulp Surrealism weaves an interpretative history of the intersection between mass print culture and surrealism, re-evaluating both our understanding of mass culture in early twentieth-century Paris and the revolutionary aims of the surrealist movement.

Pulp Surrealism presents four case studies, each exploring the out-of the-way and impertinent elements which inspired the surrealists. Walz discusses Louis Aragon's Le paysan de Paris, one of the great surrealist novels of Paris. He goes on to consider the popular series of Fantômes crime novels; the Parisan press coverage of the arrest, trial, and execution of mass-murderer Landru; and the surrealist inquiry "Is Suicide a Solution?", which Walz juxtaposes with reprints of actual suicide faits divers (sensationalist newspaper blurbs).

Although surrealist interest in sensationalist popular culture eventually waned, this exploration of mass print culture as one of the cultural milieux from which surrealism emerged ultimately calls into question assumptions about the avant-garde origins of modernism itself.

"A ‘wonder cabinet’ of a book that brings to vivid life again the ephemeral pleasures of flânerie in Paris. Walz is a marvelous guide to the pulp fiction, newspaper sensationalism, and ‘disreputable,’ fast-disappearing neighborhoods of Paris that the surrealists not only loved but drew on for inspiration in their revolutionary effort to reconfigure human consciousness in early twentieth-century France." Richard Abel, author of The Ciné Goes to Town: French Cinema, 1896–1914 and The Red Rooster Scare: Making Cinema American, 1900–1910

"Robin Walz's Pulp Surrealism represents an original and creative approach to the cultural history of the French interwar avant-garde. He shifts our focus away from surrealist texts themselves to the conditions of their production and in the process illuminates in fascinating ways the relationship between surrealism and popular culture." Carolyn Dean, author of The Frail Social Body: Pornography, Homosexuality, and Other Fantasies in Interwar France

"Pulp Surrealism is the vibrant story of the interplay between avant-garde intellectuals and emerging mass culture in the early years of the twentieth century. In this stimulating history Robin Walz lays bare the many contradictory connections between high and popular culture, and in the process restores to life the brilliant effrontery and joy of the surrealist movement." Tyler Stovall, author of The Rise of the Paris Red Belt and Paris Noir: African Americans in the City of Light

Robin Walz is Assistant Professor of History at the University of Alaska Southeast.

Book Description 2000. Condition: NEW. 9780520216198 This listing is a new book, a title currently in-print which we order directly and immediately from the publisher. For all enquiries, please contact Herb Tandree Philosophy Books directly - customer service is our primary goal. Seller Inventory # HTANDREE01134492