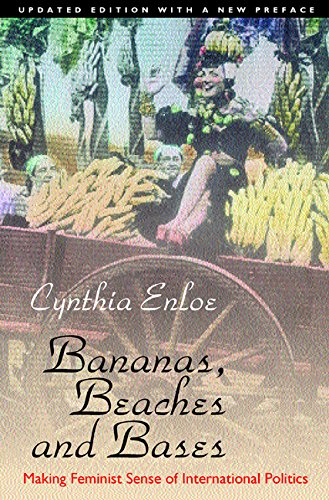 This radical analysis of globalization reveals the crucial role of women in international politics today. Cynthia Enloe pulls back the curtain on the familiar scenes—governments promoting tourism, companies moving their factories overseas, soldiers serving on foreign soil—and shows that the real landscape is not exclusively male. She describes how many women's seemingly personal strategies—in their marriages, in their housework, in their coping with ideals of beauty—are, in reality, the stuff of global politics. In exposing policymakers' reliance on false notions of "femininity" and "masculinity," Enloe dismantles an apparently overwhelming world system, revealing it to be much more fragile and open to change than we think.

"A new edition of Bananas, Beaches, and Bases is cause for cosmic good cheer. This trailblazing treatment of the gender politics of global market and military projects is a feminist classic. Always ahead of the curve, before globalization had achieved cache in academic circles Enloe was there, cajoling Western feminists out of our political parochialism. There is no more creative, insightful, engaging feminist guide to international politics. Cynthia Enloe is an international feminist treasure, and Bananas, Beaches, and Bases her signature work." Judith Stacey, author of Brave New Families

"Bananas, Beaches, and Bases is both a Pandora's Box’ and a roadmap: It unleashes questions and insights that many conventional students of International Politics are accustomed to ignoring or overlooking about the dynamic between gender and international political life, and it guides us to see how both are mutually constitutive. As the "magna carta" of Feminist International Relations, it has helped create a new generation of women and men in the world of international relations." Katharine Moon, author of Sex Among Allies

"Cynthia Enloe writes with passion, conviction, intelligence and verve as she makes such good feminist sense of international politics that the world never looks quite the same again. Innovative and a great read, Bananas, Beaches and Bases continues to be an outstanding example of the difference gender makes in social analysis. This is a book which provokes discussion with students, colleagues, friends and family. It is a book which has set the standard form much that followed. A classic." Diane Bell, author of Ngarrindjeri Wurrurwarrin: A World That Is, Was, and Will Be

"With this volume, Cynthia Enloe single-handedly carved out a major new field. Combining contemporary political insight and historical sensitivity, Bananas, Beaches and Bases revealed the gendered workings of high politics, without which the entire machinery of war, diplomacy and governance would have long since collapsed. A pioneering tour-de-force." Philippa Levine, author of Victorian Feminism, 1850-1900

Cynthia Enloe is Professor of Government at Clark University and author of Maneuvers: The International Politics of Militarizing Women's Lives (California, 2000), The Morning After: Sexual Politics at the End of the Cold War (California, 1993), and Does Khaki Become You? (1988).
Cynthia Enloe won the Howard Zinn Lifetime Achievement in Peace Studies Award from the Peace and Justice Studies Association (PJSA).