Items related to Shanghai Splendor: Economic Sentiments and the Making...

Shanghai Splendor: Economic Sentiments and the Making of Modern China, 1843-1949 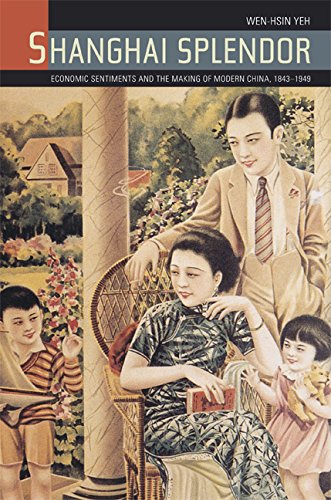 Rich with details of everyday life, this multifaceted social and cultural history of China's leading metropolis in the twentieth century offers a kaleidoscopic view of Shanghai as the major site of Chinese modernization. Engaging the entire span of Shanghai's modern history from the Opium War to the eve of the Communist takeover in 1949, Wen-hsin Yeh traces the evolution of a dazzling urban culture that became alternately isolated from and intertwined with China's tumultuous history. Looking in particular at Shanghai's leading banks, publishing enterprises, and department stores, she sketches the rise of a new maritime and capitalist economic culture among the city's middle class. Making extensive use of urban tales and visual representations, the book captures urbanite voices as it uncovers the sociocultural dynamics that shaped the people and their politics.

"What a fine and illuminating book! Shanghai Splendor is an important and captivating work of scholarship."—David Strand, author of Rickshaw Beijing: City People and Politics in the 1920s

"This in an outstanding work. Although Shanghai has been among the most popular subjects for scholars in modern Chinese studies, one has yet to see a project as impressive as this. Yeh tells a most fascinating story."—David Der-wei Wang, author of The Monster That Is History: History, Violence, and Fictional Writing in 20th Century China

Wen-hsin Yeh is Richard H. and Laurie C. Morrison Professor in History at the Institute of East Asian Studies, University of California, Berkeley. She is author of The Alienated Academy: Culture and Politics in Republican China and Provinical Passages: Culture, Space, and the Origins of Chinese Communism (UC Press) and editor of Becoming Chinese: Passages to Modernity and Beyond, 1900–1950 (UC Press).

1. Shanghai Splendor: Economic Sentiments and the Making of Modern China, 1843-1949