Items related to The Cambridge History of American Foreign Relations,...

The Cambridge History of American Foreign Relations, Volume 2: The American Search for Opportunity, 1865-1913 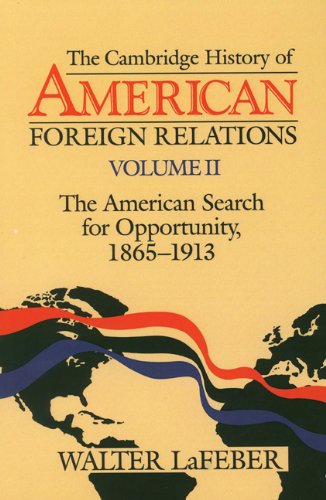 The American Search for Opportunity, 1865-1913 analyzes the period between the American Civil War and World War I (1865-1913) as the formative basis for twentieth-century American world power--"The American Century" as it has become known--and examines the "Imperial Presidency" that these roots produced. The extent of U.S. power was so great that it not only transformed American society, but reshaped other societies around the globe as well, by helping fuel--and in some cases directly causing--the great revolutions of the late-nineteenth and early-twentieth centuries in Mexico, Russia, China, Cuba, Hawaii, the Philippines, Panama, and Central America. The book, therefore, not only examines American history, but the history of many other areas that were dramatically affected by U.S. power as they entered the twentieth century.

Examining not only American history, but that of many other areas dramatically affected by U.S. power as they entered the 20th century, this volume analyzes the period between the American Civil War and World War I as the formative basis for 20th-century American world power.

"Walter LaFeber offers a provocative and arresting thesis--that instead of promoting order, the rise of America to world power had a disruptive impact on the international community at the turn of the 20th century. His book promises to renew interest in a relatively neglected but vital period in American diplomatic history." Robert A. Divine, University of Texas at Austin

"These books can be read together, or, thanks to fairly broad and overlapping introductory chapters, they can be read as discrete volumes. They will certainly make an impact on the profession." Canadian Journal of History

"Happily, the new, four-volume Cambridge History of American Foreign Relations provides an opportunity to scan the past two centuries for indications of the shape of foreign policy in the post-Cold War world. Each of the four books stands on its own. Each offers a clear overview of a particular period written by a distinguished historian drawing on a considerable body of research, itself the product of decades of scholarly endeavor. None is simply a chronicle of events." World Policy Journal

1. The Cambridge History of American Foreign Relations, Volume 2: The American Search for Opportunity, 1865-1913