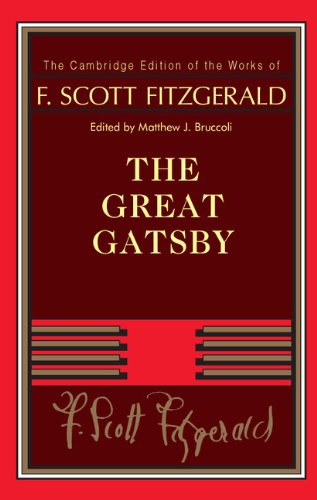 Since its publication in 1925, The Great Gatsby, F. Scott Fitzgerald's account of the American dream gone awry, has established itself as one of the most popular and widely read novels in the English language. Until now, however, no edition has printed the novel exactly as Fitzgerald intended. The first edition was marred by errors resulting from Fitzgerald's extensive rewriting in proof and the conditions under which the book was produced; moreover, the subsequent transmission of the text introduced proliferating departures from the author's words. This critical edition draws on the manuscript and surviving proofs of the novel, together with Fitzgerald's subsequent revisions to key passages, to provide the first authoritative text of The Great Gatsby. This volume also includes a detailed account of the genesis, composition, and publication of the novel; a full textual apparatus; crucial early draft material; helpful glosses on the peculiar geography and chronology of the book; and explanatory notes on topical allusions and historical references that contemporary readers might otherwise miss. Fitzgerald's masterpiece is thus brought closer to a cross-section of readers, more accessibly and more authentically than ever before. Matthew J. Bruccoli has published widely. He is the author of Some Sort of Epic Grandeur: The Life of F. Scott Fitzgerald (1980) and editor of New Essays on The Great Gatsby (CUP, 1985).

This critical edition of The Great Gatsby draws on the manuscript and surviving proofs of the novel, together with Fitzgerald's subsequent revisions to key passages to provide the first authoritative text of one of the classic works of the twentieth century.