Items related to Women, the State and Revolution (Cambridge Russian,... 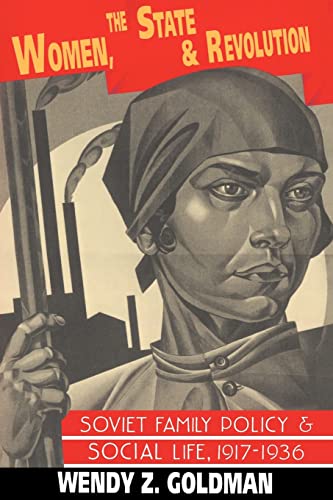 When the Bolsheviks came to power in 1917, they believed that under socialism the family would "wither-away." They envisioned a society in which communal dining halls, daycare centers, and public laundries would replace the unpaid labor of women in the home. Yet by 1936 legislation designed to liberate women from their legal and economic dependence had given way to increasingly conservative solutions aimed at strengthening traditional family ties and women's reproductive role. This book explains the reversal, focusing on how women, peasants, and orphans responded to Bolshevik attempts to remake the family, and how their opinions and experiences in turn were used by the state to meet its own needs.

Focusing on how women, peasants and orphans responded to Bolshevk attempts to remake the family, this text reveals how, by 1936, legislation designed to liberate women had given way to increasingly conservative solutions strengthening traditional family values.

"...a valuable investigation of issues central to the Soviet regime's claim for seven decades of liberating women and fostering freer, more equal relations between the sexes....The book should be read by all serious students of the Soviet period." Choice

"Goldman's hard-hitting book traces the reversal of the Bolshevik prerevolutionary vision 'based on four primary precepts: free union, women's emancipation through wage labor, the socialization of housework, and the withering away of the family.' Goldman writes entertainingly without compromising her scholarship." Women East-West

"...an admirable examination of the tension between reality and ideal in family policy in the first two decades of the Soviet state....the wealth of detail and extent of analysis make this a useful book for historians of family, family policy and of the early Soviet Union." Susannah Lockwood Smith, WHOM Newsletter

"In her intelligent and sympathetic book, Wendy Goldman studies the reaction of the Bolsheviks to what they saw as the 'conservatism' of Russian women, for whom neither migration nor employment had changed their traditional dependence on husband and family....contribute[s] in novel ways to thinking about an old, but fundamental aspect of the Revolution, namely, the extent of the continuity and change across the 1917 divide....should convince sceptics that a study of gender differences can deepen our understanding of the relation between social and political change in general." S. A. Smith, Times Literary Supplement

7. Women, the State and Revolution

Book Description 1994. Paperback. Condition: NEW. 9780521458160 This listing is a new book, a title currently in-print which we order directly and immediately from the publisher. For all enquiries, please contact Herb Tandree Philosophy Books directly - customer service is our primary goal. Seller Inventory # HTANDREE0458302