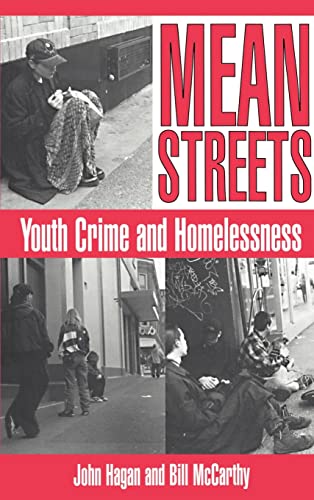 This field study features intensive personal interviews of more than four hundred young people who have left home and school and are living on the streets of Toronto and Vancouver. The study examines why youth take to the streets, their struggles to survive there, their victimization and involvement in crime, their associations with other street youth, especially within "street families," their contacts with the police, and their efforts to rejoin conventional society. Major theories of youth crime are analyzed and reappraised in the context of a new social capital theory of crime.

"Hagan and McCarthy show in an evocative new way why social programs to combat homelessness, hunger, and child abuse; active labour market programs; and resorative justice, rather than stigmatizing punishment, are the policy prescription that should occupy our attention. Homeless youth are found not to be alone and untouchable, but touched in destructive ways that might be repaired. Through making the shift from school criminology to street criminology, Hagan and McCarthy suggest how the field might shake off its current nihilism. Mean Streets reframes criminology's great debates with data of a most illuminating sort." John Braithwaite, The Australian National University

"Transcending the qualitative-quantitative divide, Hagan and McCarthy achieve a milestone in criminological research with the publication of Mean Streets. Based on a seamless blend of qualitative interviews with state-of-the-art quantitative analysis, Mean Streets provides criminology with an exciting new understanding of crime on the streets. This is `must' reading at its best." Robert Sampson, University of Chicago

"This unlikely combination of sensitive ethnography, sophisticated sampling and data analysis, and subtle theoretical argument yields a sensational outsome. Hagan and McCarthy revive and update the Chicago school of urban sociology with this brilliant account of street youth, homelessness and crime. Sterile debates about individual pathology vs. harsh environment are dissolved and transcended by their complex and lucid account of real individuals in their real social contexts. A landmark achievement." Mark Granovetter, Stanford University

"A pathbreaking study of street youth that sets admirable standards of inquiry on a major social problem. In the voices of youth and field reports over time, we discover the harsh conditions that lead young people to life on the city streets, the human cost of their survival strategies, and the way some manage to escape. A truly innovative account of troubled lives in motion that should inform policy debates." Glen Elder, University of North Carolina

"This is a masterful study of an important, but neglected population of youth: those who reside on the streets. I believe their study will have a fundamental impact on the field, moving us beyond our almost exclusive focus on school-based populations, reemphasizing the importance of adverse experiences in the explanation of crime, and providing a model of theoretical integration that takes account of both macro- and micro-factors. Their skillful blend of qualitative and quantitative analyses makes for a most riveting book." Robert Agnew, Emory University

"Hagan and McCarthy's Mean Streets is better than the Scorese film by the same name. "...this book brings insight to the social and emotional complexities that typify the lives of homeless adolescents and young adults in Toronto and Vancouver." "I found Mean Streets to be an insightful, beautifully written, meticulous analysis of a very complex street scene. Hagan and McCarthy should be commended for their hard work, dedication, and concern for revealing the lives of adolescents on the street." Social Forces

"Mean Streets is the first major study of street youth between the ages of 15 and 24, conducted on their own turf. It seeks to examine the perspectives of these young people, as well as the relationship between homelessness and crime....The findings are disturbing." The Toronto Globe and Mail

"The authors have succeeded well in reaching their elusive population of interest (i.e., homeless youth) and have carried out a first-class empirical study of the linkages between their social conditions and criminal activity. The most understanding feature of the book lies in its imaginative operationalization of concepts and sophisticated empirical testing of theories and hypotheses. It would be difficult to find a better example of demanding, quality empirical research for fellow researchers to learn from." CJS Online

Book Description 1997. Hardback. Condition: NEW. 9780521497435 This listing is a new book, a title currently in-print which we order directly and immediately from the publisher. For all enquiries, please contact Herb Tandree Philosophy Books directly - customer service is our primary goal. Seller Inventory # HTANDREE0459834