Charitable Knowledge: Hospital Pupils and Practitioners in Eighteenth-Century London (Cambridge Studies in the History of Medicine) 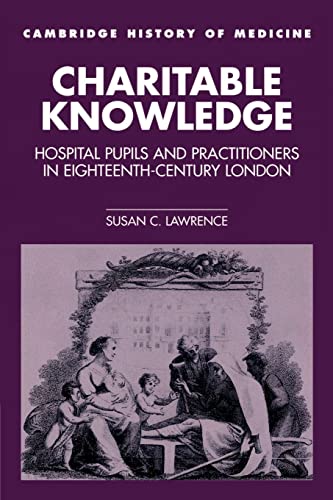 Charitable Knowledge explores the interconnections among medical teaching, medical knowledge and medical authority in eighteenth-century London. The metropolis lacked a university until the nineteenth century, so the seven major voluntary hospitals--St. Bartholomew, St. Thomas, Guy, the Westminster, St. George, the Middlesex, and the London--were crucial sites for educating surgeons, surgeon-apothecaries and visiting physicians. Lawrence explains how charity patients became teaching objects, and how hospitals became medical schools. She demonstrates that hospital practitioners gradually gained authority within an emerging medical community, transforming the old tripartite structure into a loosely unified group of de facto general practitioners dominated by hospital men. Historians of science and medicine will want to read this book.

"Based on extensive research of primary sources, thoughtful analysis, and meticulous study over a ten-year period, this is a scholarly work of the first order. Lucidly written, diversely supported, brilliantly balanced, and well organized, an engaging book well worth reading, and a valuable resource." Choice

"Physicians interested in the direction historians of medicine are increasingly taking with respect to the examination of health care institutions can do no better than to read this book....Lawrence has deftly handled an enormous amount of primary source material--hospital records, minutes of board meetings, journals, diaries, and newspapers--to produce a valuable portrait....Lawrence has produced an excellent analytic study, one that adds fundamentally to our knowledge of the transformation of the early modern hospital and the development of medical education in England." Norman Gevitz, New England Journal of Medicine

"This truly splendid book will keep historians (of all varieties) talking for a long time." Christopher Lawrence, Isis

"This is an excellent book, well-written and tightly argued, and full of relevant and telling detail, the result of exhaustive archival work....this is a valuable contribution to the historiography of eighteenth-century Britain." Anita Guerrini, Albion

"This is a thorough and well-argued analysis of the development of hospital teaching in eigteenth century London ....All readers will find in Larence's book a carefully though out, well documented and thoroughly researched work that is likely to become the standrad in its field." Margaret DeLacy, American Historical Review

Book Description 2002. Paperback. Condition: NEW. 9780521525183 This listing is a new book, a title currently in-print which we order directly and immediately from the publisher. For all enquiries, please contact Herb Tandree Philosophy Books directly - customer service is our primary goal. Seller Inventory # HTANDREE0461002

2. Charitable Knowledge: Hospital Pupils and Practitioners in Eighteenth-Century London (Cambridge Studies in the History of Medicine)

5. Charitable Knowledge: Hospital Pupils and Practitioners in Eighteenth-Century London (Cambridge Studies in the History of Medicine)