Items related to Gandhi: 'Hind Swaraj' and Other Writings (Cambridge... 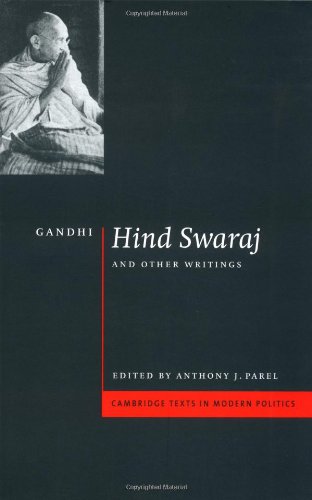 Hind Swaraj is Mahatma Gandhi's fundamental work, and a key to the understanding both of his life and thought, and South Asian politics in the twentieth century. This volume presents for the first time the original 1910 edition of this work, including Gandhi's Preface and Foreword, not found in other editions. This is the first fully annotated edition of the work, and the volume also includes Gandhi's correspondence with Tolstoy, Nehru and others. Anthony Parel's introduction sets the work in its historical and intellectual contexts. Short bibliographical notes on prominent figures mentioned in the text and a chronology of important events are also included as aids to the reader.

Anthony J. Parel is Professor Emeritus of Political Science at the University of Calgary. He is the author of The Machiavellian Cosmos (1992) and Gandhi's Philosophy and the Quest for Harmony (Cambridge, 2006).

'This edition will not only make available Gandhi's 'seminal work' to a new audience; it should also help to further debate about the ideological character of Indian nationalism, that most untypical of movements.' Sunil Khilnani, The Times Literary Supplement