Items related to The Making of the Chinese Industrial Workplace: State,... 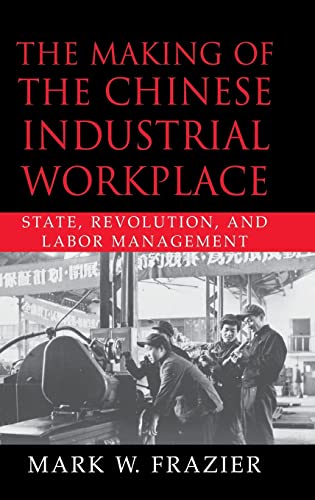 The origins of the "iron rice bowl" of comprehensive cradle-to-grave benefits and lifetime employment in Chinese factories is traced in this book. It suggests that, in some ways, the Chinese revolution in 1949 was not as revolutionary as most have thought. This is one of a very few books to look comparatively at the Chinese industrial workplace in pre-1949 China and post-1949 China. Frazier has mined sources that were unavailable to previous generations of researchers on China.

"Reveals new perspectives.... This book will be essential reading for scholars interested in modern Chinese economic history, as well as those interested in the structure of Chinese society under communism and the historical antecedents to the current era of economic reform." Journal of Asian Studies

"This well-written and intensively researched study is certainly the best monograph to date on the evolution of an institution, which though now receding before the relentless tides of market economics, embodied a synchronized mixture of state control of the workplace and extensive welfare provisions for factory employees.... Frazier's book is essential reading for anyone interested in the historical emergence of modern Chinese industrialization." Choice

"This fascinating study does an invaluable service of traversing the divide between China before and after the revolution and recognizing the subnational diversity of Chinese institutions." America Journal of Sociology

"This is an extremely useful study, which charts the evolution of workplace industrial relations from the 1920s to the early 1960s and provides an accessible, comprehensive, thorough, and reliable account of those relations." Business History Review

"Frazier's The Making of the Chinese Industrial Workplace will make important contributions to the scholarship of...the Chinese danwei...Frazier's analysis will force those who analyze Chinese firm-level institutions, a somewhat smaller field of researchers, to fundamentally reconsider many of their assumptions of the Chinese work unit's origins." Perspectives on Politics

1. The Making of the Chinese Industrial Workplace

Book Description 2002. Hardback. Condition: NEW. 9780521800211 This listing is a new book, a title currently in-print which we order directly and immediately from the publisher. For all enquiries, please contact Herb Tandree Philosophy Books directly - customer service is our primary goal. Seller Inventory # HTANDREE0476486

2. The Making of the Chinese Industrial Workplace

3. The Making of the Chinese Industrial Workplace: State, Revolution, and Labor Management

4. The Making Of The Chinese Industrial Workplace: State, Revolution, And Labor Management (Hb 2003)

5. The Making Of The Chinese Industrial Workplace: State, Revolution, And Labor Management (Hb 2003)