Items related to Evolution of the Insects (Cambridge Evolution Series) 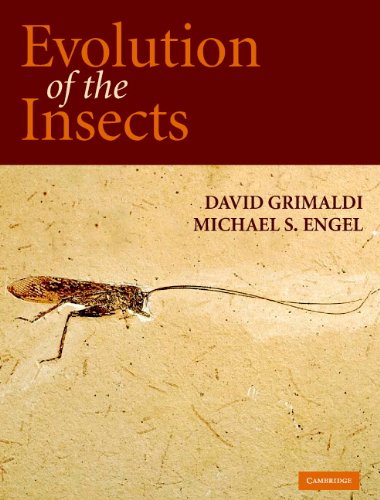 This book chronicles the complete evolutionary history of insects--their living diversity and relationships as well as 400 million years of fossils. Introductory sections cover the living species diversity of insects, methods of reconstructing evolutionary relationships, basic insect structure, and the diverse modes of insect fossilization and major fossil deposits. Major sections then explore the relationships and evolution of each order of hexapods. The volume also chronicles major episodes in the evolutionary history of insects from their modest beginnings in the Devonian and the origin of wings hundreds of millions of years before pterosaurs and birds to the impact of mass extinctions and the explosive radiation of angiosperms on insects, and how they evolved into the most complex societies in nature. Whereas other volumes focus on either living species or fossils, this is the first comprehensive synthesis of all aspects of insect evolution. Illustrated with 955 photo- and electron- micrographs, drawings, diagrams, and field photos, many in full color and virtually all of them original, this reference will appeal to anyone engaged with insect diversity--professional entomologists and students, insect and fossil collectors, and naturalists. David Grimaldi and Michael S. Engel have collectively published over 200 scientific articles and monographs on the relationships and fossil record of insects, including 10 articles in the journals Science, Nature, and Proceedings of the National Academy of Sciences. David Grimaldi is curator in the Division of Invertebrate Zoology, American Museum of Natural History and adjunct professor at Cornell University, Columbia University, and the City University of New York. David Grimaldi has traveled in 40 countries on 6 continents, collecting and studying recent species of insects and conducting fossil excavations. He is the author of Amber: Window to the Past (Abrams, 2003). Michael S. Engel is an assistant professor in the Division of Entomology at the University of Kansas; assistant curator at the Natural History Museum, University of Kansas; research associate of the American Museum of Natural History; and fellow of the Linnean Society of London. Engel has visited numerous countries for entomological and paleontological studies, doing most of his fieldwork in Central Asia, Asia Minor, and the Western Hemisphere.

This book chronicles for the first time the complete evolutionary history of insects: their living diversity, relationships and 400 million years of fossils. Lavishly illustrated with original photo- and electronmicrographs, drawings, diagrams, and field photos, many in full colour. Essential reading for anyone interested in insect diversity.

"A landmark contribution, not just to entomology and evolutionary biology, but to the life sciences as a whole. Beautifully conceived, splendidly written, and exquisitely illustrated...Bound to remain a primary scientific reference for years to come. A must for naturalists, young and old. Truly a definitive work."
Thomas Eisner, Cornell University, Author of For Love of Insects

"Whatever is in store, The Evolution of Insects superbly documents the rich and colorful history of hexapods."
Edmund Jarzembowski, SCIENCE

"...a 'must have' for anyone interested in this extraordinary group of organisms...the stress on the importance of insects in the daily life of the planet is one of the book's many strengths...a joy simply to browse, not only because of the high standard of the images...but also because of the discoveries to be made on every page..."
BBC Wildlife

"...insects deserve the immense, sumptuously illustrated monography text Grimaldi and Engel have now provided. Evolution of the Insects is a hugely impressive achievement. Throughout, the writing is clear and lively, the scholarship outstanding and the amount of information summarized vast. The enthusiasm of the authors for entomology shows in every aspect of this book, but the task of creating or assembling the images alone has evidently been a colossal labor of love...for its wealth of insights, as well as its unprecedented scope and depth, this superlative synthesis should have a durable appeal not only to entomologists, but also to biologists in general."
TRENDS in Ecology and Evolution

"There are a number of good entomology books on the market. Few, however, have integrated the living and fossil record as seamlessly as David Grimaldi and Michael Engel's Evolution of the Insects. None, moreover, has combined this integration with so much student-friendly text and such a wealth of illustrations (more than 900)."
Science

"Grimaldi and Engel, two entomologists, have produced a really excellent, beautifully illustrated account that will enthrall both student and general reader. They have gone to town on the tome that is not just informative but also accessible and covers one of the most important topics in biology."
New Scientist

"Put all of the insects on a giant scale, and they will outweigh all other animals, whales and elephants included. And insects are also ecologically essential. If all humans decided to leave for Mars, life on Earth would not change much. All the vertebrates could probably leave as well, causing only a minimum of disruption. But if the insects disappeared, catastrophe would ensue. Forests would probably collapse, rivers and oceans would be poisoned, and many other animals would starve. Two entomologists have now written the first book that chronicles this success story. Evolution of the Insects, published by Cambridge University Press, is the result of five years' labor by David Grimaldi of the American Museum of Natural History and Michael Engel of the University of Kansas. Grimaldi and Engel are well-qualified for the job. Among their many accomplishments, they identified the oldest insect fossils from a 410-million-year-old rock in 2004. But to write Evolution of the Insects, they went well beyond their own research and synthesized the work of the armies of scientists who study living insects, dig up insect fossils and discover evolutionary secrets in insect DNA Advent of wings. This effort has produced an increasingly clear picture of the rise of insects."
San Diego Union Tribune

"This is a beautifully produced book, with cleanly presented photos of fossils supplemented by attractively produced photos of living taxa, elegant line drawings, diagrams, and tables. The authors and Cambridge University Press are to be congratulated for making this large volume such a pleasure to read and use."
J.B. Whitfield, American Entomologist

"Evolution of the Insects is filled with lavish color photographs of both fossil and recent insects."
George Poinar, Jr., American Scientist

"Evolution of the Insects by David Grimaldi and Michael S. Engel is the first book that has attempted to pull together and synthesize both fossil and recent evidence for insect evolution, and to present the information in an accessible, engaging way. They have succeeded to an unprecedented degree, and anyone with an active or passing interest in insects owes it to themselves to have a look."
Quentin D. Wheeler, Natural Science

EVOLUTION OF THE INSECTS (CAMBRI