Items related to Catholic and Reformed: The Roman and Protestant Churches... 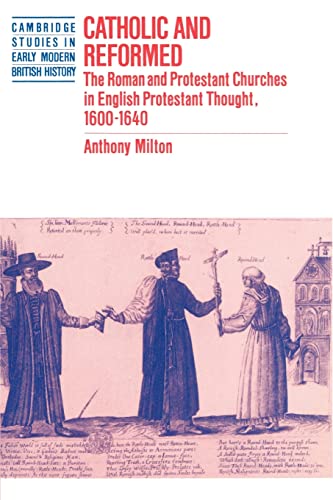 Religious controversy was central to political conflict in the years leading up to the outbreak of the English Civil War. Historians have focused on one religious doctrine--predestination, but Catholic and Reformed analyzes the broader preconceptions that lay behind religious debate. It offers an analysis of the nature of the English Church, and how this related to the Roman Catholic and Reformed Churches of the Continent. The book's conclusions explain the nature of English religious culture and its role in provoking the Civil War.

Catholic and Reformed transcends the current boundaries of the historical debate concerning the role of religious conflict in the politics of the early Stuart period. While earlier studies have focused more narrowly on the doctrine of predestination, Dr Milton analyses the broader attitudes which underlay notions of religious orthodoxy in this period. He achieves this through the first comprehensive analysis of how contemporaries viewed the Roman and foreign Reformed Churches in the early Stuart period. Milton's account demonstrates the way in which an author's choice of a particular style of religious discourse could be used either to mediate or to provoke religious conflict. This study challenges many current historical orthodoxies. It identifies the theological novelty of Laudianism, but also exposes significant areas of ideological tension within the Jacobean Church. Its wide-ranging conclusions will be of vital concern to all students of early Stuart religion and the origins of the English civil war.

Book Description 2002. Paperback. Condition: NEW. 9780521893299 This listing is a new book, a title currently in-print which we order directly and immediately from the publisher. For all enquiries, please contact Herb Tandree Philosophy Books directly - customer service is our primary goal. Seller Inventory # HTANDREE0483199

3. Catholic and Reformed: The Roman and Protestant Churches in English Protestant Thought, 1600 1640

4. Catholic and Reformed: The Roman and Protestant Churches in English Protestant Thought, 1600-1640

8. Catholic and Reformed: The Roman and Protestant Churches in English Protestant Thought, 1600 1640