Items related to Counterpunch: A Woman's Journey from the Terror...

Rossen, Carol Counterpunch: A Woman's Journey from the Terror of Violence through Rage to Survival

Counterpunch: A Woman's Journey from the Terror of Violence through Rage to Survival 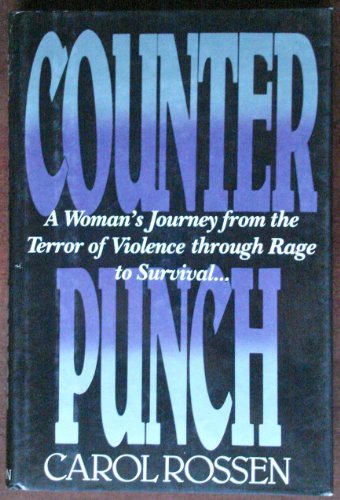 An account of the actress-author's vicious bludgeoning in a Los Angeles park and of her survival emphasizes her will to survive, the value of humor, and a celebration of life

On Valentine's Day 1984, the author, an actor, was brutally assaulted while jogging in Los Angeles's Will Rogers State Park. Here she recreates the horrifying experience and its aftermath. Although left for dead by her sledge-hammer attacker, who was not apprehended, Rossen recovered physically with the help of facial surgery; her emotional healing was a lengthier ordeal. As she recalls the ways she emerged from being a victim, passing through terror and anger to eventual triumph over her fear, she interweaves snippets of her background: her father, a Hollywood producer; her relationships with her former husband, actor Hal Holbrook, lovers and other friends; and her California lifestyle. Narrated with humor and a certain self-indulgence, Rossen's story provides catharsis for the victim and illustrates that, for her, survival is an act of will.
Copyright 1988 Reed Business Information, Inc.

Because residents of wealthy areas may be oblivious to the possibility of random violence, it may affect them even more intensely than others who live with it daily. Actress Rossen, daughter of director Robert Rossen and ex-wife of actor Hal Holbrook, was jogging in a park when a stranger bludgeoned her with a sledgehammer. By feigning death, she lived to tell about it. Depicting herself as a woman who wouldn't give in to tragedy, Rossen managed to turn the experience into a source of strength. This honest and personal account of Rossen's assault and subsequent recovery is inspiring. For public and patients' libraries. Christy Zlatos, Auburn Univ. Lib., Ala.
Copyright 1988 Reed Business Information, Inc.

1. Counterpunch: A Woman's Journey from the Terror of Violence through Rage to Survival Rossen, Carol