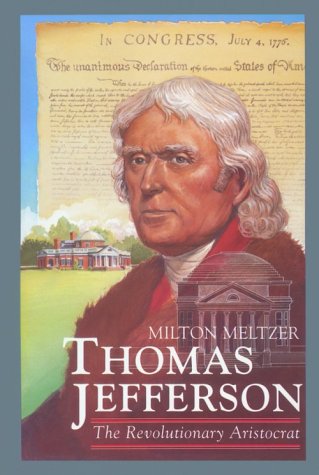 A fascinating portrait that vividly portrays Jefferson's extraordinary brilliance and complexity--and his deep ambivalence about slavery--setting his ideas against historical events and society and his own uniquely wide-ranging gifts. Unblinking and persistent, Meltzer presents Jefferson as the product and beneficiary of the slave-dependent South, from his earliest memory to the slave-built coffin in which he was buried. The motif is not a condemnation--Meltzer points out that this original thinker was ahead of his time in perceiving slavery as evil. Rather, the book dramatizes the contradictions between the humane philosopher, the persuasive political realist who won support by pushing neither too fast nor too far, and the aristocrat who enjoyed luxury and was the generous head of an extended family, chronically in debt. Marshalling hundreds of telling facts, incidents, and quotes, Meltzer fills each page of a lively, well-organized narrative with insights and intriguing revelations (e.g., that as secretary of state, Jefferson personally approved patents, testing designs himself; and that his scientific paper on one of these was the first ever published by the US). Most admirably, Jefferson is seen here in a world whose difference from ours is exemplified by the fact of his State Department staff numbering just five, as well as by the range of his accomplishments; emphasis on the discrepancies between Jefferson's words and deeds is used as an effective device for bringing the real world in which he lived vibrantly to life. A fine author at his best: outstanding. Illustrated with many well-chosen prints, maps, photos, etc., meticulously captioned but not always well represented; excellent bibliographical essay; index. (Biography. 12+) -- Copyright ©1991, Kirkus Associates, LP. All rights reserved.

Grade 7-9-- A fine examination of Jefferson's brilliant and complex life, detailing his successes and failures. Meltzer writes with his usual lively style and clarity and provides plenty of historical background and detail. His discussion concentrates on Jefferson's long and productive public service, but includes personal information, especially the scandals that have assumed a life of their own, to help readers understand the man's behavior and motivations. He maintains objectivity about Jefferson, looking at his actions as a leader during the Revolutionary era and in his later presidency in the context of both his and modern times. Especially strong, however, is Meltzer's look at Jefferson's views on slavery. Like many early Americans, he was deeply troubled by the institution yet continued to own, trade, and use the services of slaves throughout his life. This contradiction illustrates how difficult the issue was and how deeply it divided the country. Good quality black-and-white reproductions and photographs are plentiful, pleasing, and well placed to lend maximum support to the text. Because the author uses recent research and scholarship (detailed in an exemplary "Sources" section), this book is a more complete and balanced treatment than Graff's Thomas Jefferson (Silver Burdett, 1968; o.p.) or Fleming's Thomas Jefferson (Norton, 1971; o.p.). Well organized and interesting, it is an excellent choice for teenage readers. --Mary Mueller, Rolla Junior High School, MO
Copyright 1991 Reed Business Information, Inc.