Items related to Griswold V. Connecticut: Contraception and the Right... 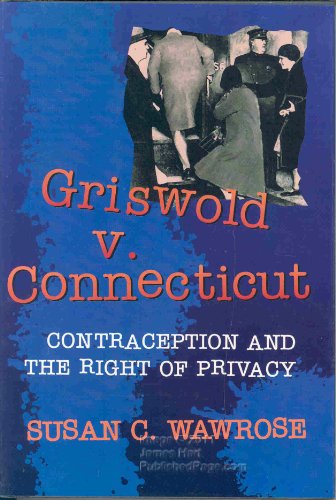 Presents a thought-provoking look at a groundbreaking Supreme Court case, Griswold v. Connecticut, involving the directors of a women's health clinic, arrested for violating state contraception laws, and the court's resulting affirmation of a constitutional right to privacy.

Gr. 6^-10. In 1961 Estelle Griswold, the executive director of the Planned Parenthood League in Connecticut, politely showed police officers all the information they needed to arrest her for violating a state law against distributing contraceptives. The case would prove to be an important one, often referred to today, for it set the precedent that privacy, though not mentioned specifically in the Constitution, was an "unenumerated right." Wawrose, who is a lawyer, skillfully dissects the legal language and theory to explain the history that took place before, during, and after Griswold. Enhanced by a nicely descriptive bibliography, this will be useful to adults as well as older children. Notes are appended, and black-and-white photographs appear throughout. Susan Dove Lempke

1. Griswold vs. Connecticut: Contraception and the Right of Privacy

Book Description Condition: New. Discusses the case which identified a constitutional right of privacy for married people to use contraception and points out the significance of the ruling. Seller Inventory # 9780531112496