Items related to The Good Old Days: Baseball in the 1930s (American...

The Good Old Days: Baseball in the 1930s (American Game) 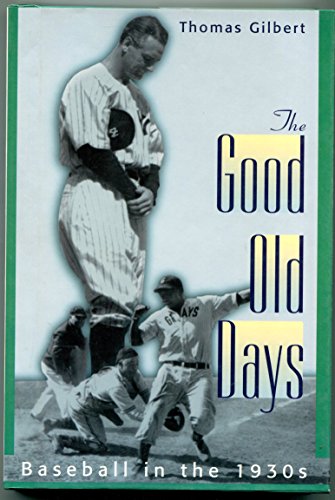 Discusses baseball events of the 1930s, including Hack Wilson's 1930 season, the last days of Babe Ruth, Lou Gehrig's career, and the advent of baseball coverage on the radio

Gr 6-9--The latest installment in a series on the history of our national pastime. This book covers a period during which most people think of baseball as truly being America's game. But as the author points out in the opening chapter, because of the Depression, the 1930s was a rough time for the sport. Attendance was dramatically down in almost all major-league cities, players' salaries and careers were precarious, and even owners sometimes faced financial difficulties. After submitting these facts, Gilbert summarizes some of the changes in the game that came about when power replaced speed and strategy. Then the book gets down to what should probably be the essence of any baseball history. Each season is covered with the focus on funny anecdotes or dramatic stories. The subjects range from Hack Wilson's notorious drinking to the St. Louis Cardinals Gas House gang to Lou Gehrig's emotional farewell. African-American baseball is covered in a chapter, as is the rise of radio as a medium whereby people followed the game. The black-and-white photos are average in quality, the index isn't great, and there's no list of sources. However, libraries that have a demand for books on baseball history and lore will find this one a useful addition.