Items related to Classical Dynamics of Particles and Systems

Classical Dynamics of Particles and Systems 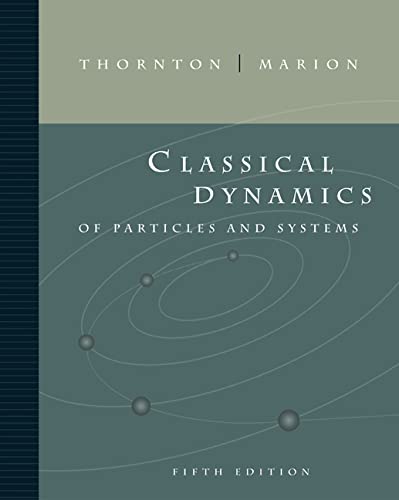 This best-selling classical mechanics text, written for the advanced undergraduate one- or two-semester course, provides a complete account of the classical mechanics of particles, systems of particles, and rigid bodies. Vector calculus is used extensively to explore topics.The Lagrangian formulation of mechanics is introduced early to show its powerful problem solving ability.. Modern notation and terminology are used throughout in support of the text's objective: to facilitate students' transition to advanced physics and the mathematical formalism needed for the quantum theory of physics. CLASSICAL DYNAMICS OF PARTICLES AND SYSTEMS can easily be used for a one- or two-semester course, depending on the instructor's choice of topics.

Stephen Thornton is Emeritus Professor of Physics at the University of Virginia. He has over 130 research publications in experimental nuclear physics and has done research at several accelerator facilities in the United States and Europe. He has directed research for 25 graduate students. He has held two U.S. Senior Fulbright-Hays Fellowships and a Max-Planck Fellowship to do research at the Max Planck Institute for Nuclear Physics in Heidelberg, Germany on two occasions. He was the founding Director of the University of Virginia Institute of Nuclear and Particle Physics. He has published three college textbooks for physics: "Classical Dynamics" and "Modern Physics" (both published by Cengage), and "Physics for Scientists and Engineers." He was Director of the Master of Arts in Physics Education program at the University of Virginia, which has graduated more than 150 high school physics teachers. He is a Fellow of the American Physical Society and a member of several organizations including American Association of Physics Teachers, American Association for the Advancement of Science, National Science Teachers Association, Virginia Association of Science Teachers (past President), and the Virginia Math and Science Coalition. He was awarded the Pegram Award by the Southeastern Section of the American Physical Society for "Excellence in Physics Education in the Southeast." He has developed multiple courses for undergraduate students and high school physics teachers.

"I like the order of topics: the early discussion of linear and non-linear oscillations and the early presentation of Lagrangian/Hamiltonian dynamics. I also like the problems at the end of the chapters."

1. Classical Dynamics of Particles and Systems

Book Description Cengage Learning, 2003. Condition: New. Brand new book. This is an international edition textbook with identical content as the US version and is usually paperback bound instead of hardcover. We ship all our orders from CA/IL, USA (depending on your address) and NOT from Asia! Buy with confidence from a 5-star US based seller. Choose expedited shipping for superfast delivery with tracking. Seller Inventory # 35|9780534408961

2. Classical Dynamics Of Particles And Systems

3. CLASSICAL DYNAMICS OF PARTICLES AND SYSTEMS

Book Description Cengage Learning, 2003. soft cover. Condition: New. International Edition. No supplemental materials. International Editions may have a different cover or ISBN but generally have the exact same content as the US edition, just at a more affordable price. In some cases, end of chapter questions may vary slightly from the US edition. International Editions are typically printed in grayscale, and likely will not have any color throughout the book. New. Books ship from multiple locations depending on availability. All orders are shipped with tracking information. We take pride in our customer service. Please contact us if you have any questions regarding this listing. Seller Inventory # 13959

4. Classical Dynamics of Particles and Systems

7. Classical Dynamics of Particles and Systems

8. Classical Dynamics of Particles and Systems

9. Classical Dynamics of Particles and Systems

Shipping: US$ 16.68
From United Kingdom to U.S.A.
Destination, rates & speeds

10. Classical Dynamics of Particles and Systems