Items related to Single Variable Calculus: Concepts and Contexts (with... 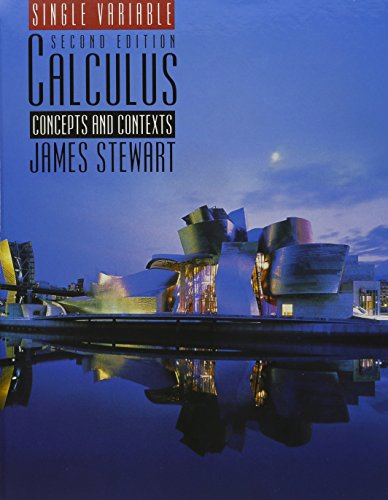 James Stewart's well-received SINGLE VARIABLE CALCULUS: CONCEPTS AND CONTEXTS, Second Edition follows in the path of the other best-selling books by this remarkable author. The First Edition of this book was highly successful because it reconciled two schools of thought: it skillfully merged the best of traditional calculus with the best of the reform movement. This new edition continues to offer the balanced approach along with Stewart's hallmark features: meticulous accuracy, patient explanations, and carefully graded problems. The content has been refined and the examples and exercises have been updated. In addition, CALCULUS: CONCEPTS AND CONTEXTS, Second Edition now includes a free CD-ROM for students that contains animations, activities, and homework hints. The book integrates the use of the CD throughout by using icons that show students when to use the CD to deepen their understanding of a difficult concept. In CALCULUS: CONCEPTS AND CONTEXTS, this well respected author emphasizes conceptual understanding - motivating students with real world applications and stressing the Rule of Four in numerical, visual, algebraic, and verbal interpretations. All concepts are presented in the classic Stewart style: with simplicity, character, and attention to detail. In addition to his clear exposition, Stewart also creates well thought-out problems and exercises. The definitions are precise and the problems create an ideal balance between conceptual understanding and algebraic skills.