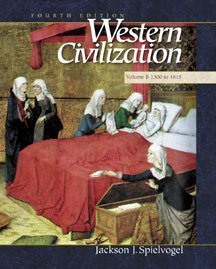 There are many reasons why this is the number one selling Western Civilization text in the country. The clear, single-author narrative by Jackson Spielvogel presents history in an appealing and accessible manner. This text truly tells a story that students will understand. WESTERN CIVILIZATION strikes a true balance and provides a synthesis of political, economic, social, religious, military, cultural, and intellectual history. This balance gives students a solid foundation for further study in history. The book's documents and maps are useful and superb.

Jackson J. Spielvogel is Associate Professor Emeritus of History at The Pennsylvania State University. He received his Ph.D. from The Ohio State University, where he specialized in Reformation history under Harold J. Grimm. His articles and reviews have appeared in journals such as Moreana, Journal of General Education, Catholic Historical Review, Archiv für Reformationsgeschichte, and American Historical Review. He also has contributed chapters or articles to The Social History of Reformation, THE HOLY ROMAN EMPIRE: A DICTIONARY HANDBOOK, the Simon Wiesenthal Center Annual of Holocaust Studies, and Utopian Studies. His work has been supported by fellowships from the Fulbright Foundation and the Foundation for Reformation Research. At Penn State, he helped inaugurate the Western Civilization course, as well as a popular course on Nazi Germany. His book HITLER AND NAZI GERMANY was published in 1987 (7th Edition, 2013). He is also the author of WESTERN CIVILIZATION, first published in 1991 (9th Edition, 2015). Professor Spielvogel has won five major university-wide teaching awards. During the year 1988?1989, he held the Penn State Teaching Fellowship, the university's most prestigious teaching award. In 1996, he won the Dean Arthur Ray Warnock Award for Outstanding Faculty member, and in 2000 received the Schreyer Honors College Excellence in Teaching Award.

"The chronologies, timelines, and boxed documents all add greatly to the overall quality of the text. My students would be lost without them. ... I like this text and expect to continue to use it for the next several years."

"Dr. Spielvogel's lucid prose, apt illustrations, and excellent maps make his a text for which I find it difficult to imagine finding a close rival. ... The coherence resulting from its being a single-author text is valuable in a general education course. ... It is a very impressive textbook and the author and publisher alike ought to take great pride in their work. ... I would not only consider adopting Jackson J. Spielvogel's WESTERN CIVILIZATION text, but would, furthermore, actively lobby for its adoption for use at our university. A wealth of information in keeping with the scholarship at our disposal is presented in an appealing format. Never sacrificing well-written content, the text appeals to a generation reared on media in living color."

"The Spielvogel text does a good job of communicating with students. The vocabulary ... is not too difficult, and the literary style is almost conversational."

"The faculty who adopted Spielvogel ... did so because the text read clearly and told a coherent story of historical change and development. Students comment that the text is well written, clearly organized, and interesting. Chapter titles and major headings mark chronological and thematic connections but place greatest emphasis on the conceptual development. ... National histories are mentioned but do not dominate; and art, literature, and music are not ignored. ... The special features are one of the greatest strengths of Spielvogel."