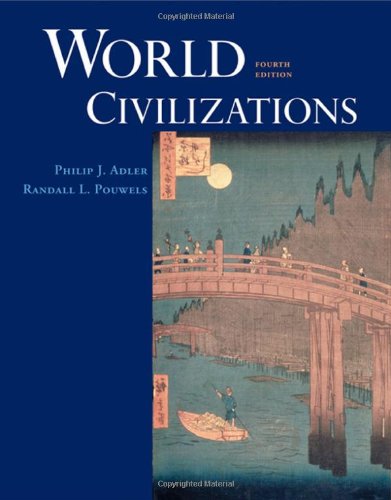 Bringing more than 50 years of combined teaching experience and expertise into WORLD CIVILIZATIONS, Philip J. Adler and Randall L. Pouwels present an accessible, comprehensive, and balanced global overview of the world's major civilizations from the ancient world to modern times. Well more than half of the content focuses on the world outside of Europe. As one of the most graphic and pedagogically driven books in the market, the text appeals to students and professors alike. Hundreds of illustrations, maps, and documents, overviews, self-tests, and additional rich pedagogical features make the history of world civilizations easier for students to study and understand. Fifty-six concise chapters make content manageable for students while giving instructors the flexibility to present the material in any way they choose. Available in the following split options: WORLD CIVILIZATIONS, FOURTH EDITION (Chapters 1-56), ISBN: 0534599338; WORLD CIVILIZATIONS, VOLUME I: TO 1700, FOURTH EDITION (Chapters 1-30), ISBN: 0534599346; WORLD CIVILIZATIONS, VOLUME II: SINCE 1500, FOURTH EDITION (Chapters 23-56), ISBN: 0534599354.

Philip J. Adler taught college courses in world history to undergraduates for almost thirty years prior to his recent retirement. Dr. Adler earned his Ph.D. at the University of Vienna following military service overseas in the 1950s. His dissertation was on the activity of the South Slav emigres during World War I, and his academic specialty was the modern history of Eastern Europe and the Austro-Hungarian empire. His research has been supported by Fulbright and the National Endowment for the Humanities grants. Adler has published widely in the historical journals of the U.S. and German-speaking Europe. He is currently professor emeritus at East Carolina University, where he spent most of his teaching career.

Randall L. Pouwels earned his B.A. in history at the University of Wisconsin and his Ph.D. in history at UCLA. His Ph.D. dissertation was on the history of Islam in East Africa. His book, HORN AND CRESCENT: CULTURAL CHANGE AND TRADITIONAL ISLAM ON THE EAST AFRICAN COAST, 800-1900 (Cambridge, 1987), has become a standard work in African history. THE HISTORY OF ISLAM IN AFRICA (Athens, Oxford, and Cape Town, 2000) was jointly edited with Nehemia Levtzion of Hebrew University, Jerusalem. Widely praised in reviews, it was selected by Choice as an Outstanding Academic Title for 2001 and was made a selection of the History Book Club. In addition, he has written numerous articles and reviews on East African history, the history of Islam in Africa, and historical methodologies. His other research interests include the history of the Middle East, the Indian Ocean, and the history and archaeology of Native Americans. Over the years, his work has been supported by grants and fellowships from Fulbright-Hays, the National Endowment for the Humanities, the Social Studies Research Council, the National Geographic Society, and the American Philosophical Society. He has taught African history for over twenty years at LaTrobe University in Melbourne, Australia, and at UCLA. He has been the Professor of African and Middle Eastern History at the University of Central Arkansas since 1984.

"Adler's short chapters set the book apart. Virtually all the world civilization and world history textbooks I have reviewed have about 30 pages per chapter and contain a bewildering amount of detail. They are encyclopedic. Adler's book is much better suited to my survey, which meets three days a week for an hour; students read one chapter per meeting. It's easily manageable and the topic of the day is clear. I can supplement as I want and students are still not overwhelmed by a massive amount of material."

"As a geographer as well as a historian, I love the inclusion of maps, especially an introductory 'Worldview' map to orient readers to textual materials. ... With each new edition of this text, I have been pleased at the changes made. This demonstrates to me that Adler, and now Pouwels, are committed to continued excellence. They are not satisfied to rest on their laurels, but instead really work on the text revisions. I applaud these efforts. And I look forward to reading the latest version."

"One of my original suggestions for the revision was to include more maps, so I am delighted to see that we are doing that. The 'spot maps' are nice, but the worldview maps are absolutely great, especially if they are accompanied by the interactive icons. My students know absolutely zero about world geography, so the worldview maps will be a very valuable addition. Color-coding the maps to the end-of-part material is a good idea, the sort of thing that students never pay any attention to, but which they notice, even if they don't realize it."