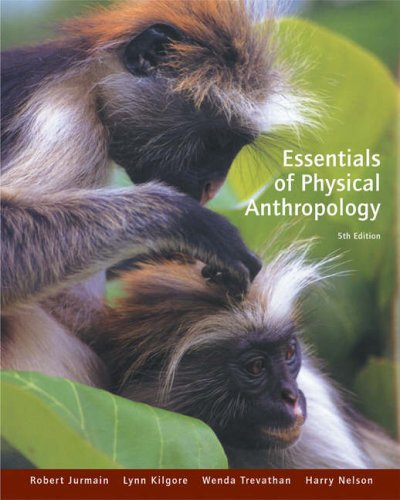 Robert Jurmain received an A.B. in Anthropology from UCLA and a Ph.D. in Biological Anthropology from Harvard. He taught at San Jose State University from 1975 to 2004 and is now Professor Emeritus. During his teaching career, he taught courses in all major branches of physical anthropology, including osteology and human evolution, with the greatest concentration in general education teaching for introductory students. His research interests are skeletal biology of humans and non-human primates, paleopathology, and paleoanthropology. In addition to his three textbooks, which together have appeared in 30 editions, he is the author of STORIES FROM THE SKELETON: BEHAVIORAL RECONSTRUCTION IN HUMAN OSTEOLOGY (1999, Gordon Breach Publishers), as well as numerous articles in research journals.

Lynn Kilgore earned her Ph.D. from the University of Colorado, Boulder, where she now holds an affiliate faculty position. Her primary research interests are osteology and paleopathology. She has taught numerous undergraduate and graduate courses in human osteology, primate behavior, human heredity and evolution, and general physical anthropology. Her research focuses on developmental defects as well as on disease and trauma in human and great ape skeletons.

Harry Nelson received his Ph.D. from the University of California at Berkeley. Dr. Nelson originally studied cultural anthropology, and broadened his teaching and research interests to include both cultural and physical anthropology. Dr. Nelson pursued his interest in physical anthropology when he teamed with colleague Dr. Robert Jurmain to develop a new text. The resulting first edition of INTRODUCTION TO PHYSICAL ANTHROPOLOGY appeared in 1979, and has regularly been revised and updated since that time. Dr. Nelson taught at Foothill College, CA., until his retirement. In December 2000, following a long illness, Dr. Nelson passed away.

"There are lots of excellent photos and graphics in each chapter. As I read the book, every time I wanted to visually see an image or graph, there was one to see."

"(Chapter 13... The Anthropological Perspective on the Human Life Course) is a great chapter, largely missing from most bio texts. Anthropologists stress population studies, but we all care about the individual."

"The margin definitions are a wonderful addition and a good learning tool."

"This book's major strength lies in its attempt to provide a comprehensive understanding of physical anthropology in a relatively concise and manageable text. The text can be effectively used for a semester as well as a term course."

"I think the photo essays are excellent. I see them as showing the applied aspects of anthropology. It is good for students to see exactly what anthropologists do in relation to many of the topics we cover in class."