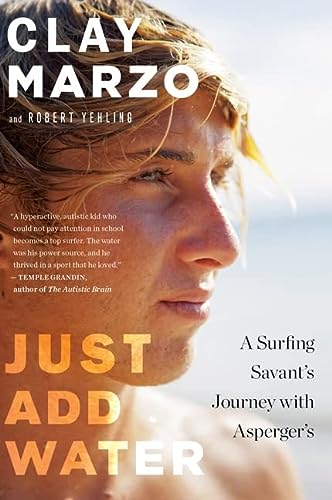 “Clay Marzo is an amazing, nearly amphibious surfer with a one-of-a-kind life story. What an inspiring book!” —Matt Warshaw, author of The Encyclopedia of Surfing

From childhood, it was obvious that Clay Marzo’s single-minded focus on surfing was unique, his skills otherworldly. But the deeper reasons for this obsession didn’t become clear until his late teens, when Marzo was diagnosed with Asperger’s syndrome.
Marzo was already a surfing phenom, winning the National Scholastic Surfing Association championship at fifteen, but it was tough for him to relate to his peers and fit in. Only while surfing did he truly feel at peace. Just Add Water is the remarkable story of Marzo’s rise to the top of the pro surfing world—and the personal trials he overcame in making it there. Unflinching and inspiring, it is a brave memoir from a one-of-a-kind surfing savant who has electrified fans around the world and whose story speaks to the hope and ultimate triumph of the human spirit.

“Marzo is one of the most amazing surfers to come along in years. He’s fantastic—and so is this book. Great stuff.” —Peter Townend, 1976 world surfing champion

“An intriguing read for any surfer, and details the life of Clay Marzo with tact and illumination. Writing the biography of one of Hawaii's most exceptional surfers is a great responsibility, and Yehling did so in a real, raw way that captures the reader's attention.” —Freesurf

CLAY MARZO is a professional surfer and was the subject of the award-winning surf documentary Just Add Water. He works extensively with Surfers Healing, a charity for autistic youth.

ROBERT YEHLING is an award-winning surfing journalist and author of ten books.

Clay Marzo has an almost preternatural gift with a surfboard. Kelly Slater envies his creativity, Laird Hamilton admires his artistry. From his first moments underwater (he learned to swim at two months old) to his first ventures atop his father’s surfboard as a toddler, it was obvious that Marzo’s single-minded focus on all things surfing was unique. But not until late in his teens, when this surfing phenom was diagnosed with Asperger’s syndrome, did the deeper reasons for his obsession—and his astonishing gift for surfing—become clear.

Just Add Water is the remarkable story of Marzo’s rise to the top of the pro surfing world—and the personal trials he overcame in making it there. Even with the incredible support of a passionate surfing family, Marzo endured a difficult childhood. He was a colicky baby who his mother found could be soothed only with water. Later, as he entered school, his undiagnosed Asperger’s made it tough for him to relate to his peers and fit in, but his relationship with the wave was elemental. Marzo could always turn to surfing, the only place where he truly felt at peace.

Unflinching and inspiring, Just Add Water is a brave memoir from a one-of-a-kind surfing savant who has electrified fans around the world with his gift and whose story speaks boldly to the hope and ultimate triumph of the human spirit. Now, for the first time ever, Clay Marzo tells his story.