Items related to The Last Hunt (The Unicorn Chronicles, Book 4) 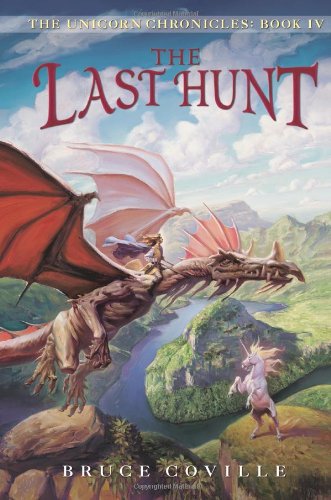 In the center if Luster stands an enormous tree called the Axis Mundi, the Heart of the World. But now that tree is wounded, pierced through by magic. And through that wound marches an army of Hunters, led by the sinister and vengeful Beloved. And they are all determined to destroy each and every unicorn. As the unicorns gather to defend their lives, the human girl, Cara, is sent on a mission to meet a ferocious and mysterious dragon. Faced with perilous danger, Cara must make a desperate decision that will change her life forever.
With a deft hand and keen imagination, master storyteller Bruce Coville brings this riveting epic fantasy series to a rousing conclusion as the secrets of Luster are finally and satisfyingly unveiled.

In the center of Luster towers an enormous tree that is the Heart of the World. Now the tree is wounded, pierced by a tunnel that connects it to Earth. Through that tunnel strides Beloved, the ancient enemy of the unicorns, followed by an army of Hunters eager to destroy every last unicorn.At the center of this great struggle is the human girl, Cara Diana Hunter, who sets out with her friend, the gryphon Medafil, to ask a dragon to aid the unicorns. As she travels Cara meets not only the dragon, but a mysterious stranger who may hold the key to Luster’s secrets.As the threads of destiny weave about her, Cara will discover at last the truth about the unicorns – a truth that brings hard choices for everyone she loves as this magnificent, multi-stranded saga thunders to its astonishing conclusion.

Bruce Coville has received over a dozen Children's Choice Awards, and has written more than ninety popular books for young people, including MY TEACHER IS AN ALIEN, INTO THE LAND OF THE UNICORNS, SONG OF THE WANDERER, and THE MONSTER'S RING. His most recent novel, DARK WHISPERS, is the third book in his beloved Unicorn Chronicles series. He lives in Syracuse, New York, with his wife, Katherine.