Items related to The Earth and Its Peoples: A Global History, Dolphin...

The Earth and Its Peoples: A Global History, Dolphin Edition 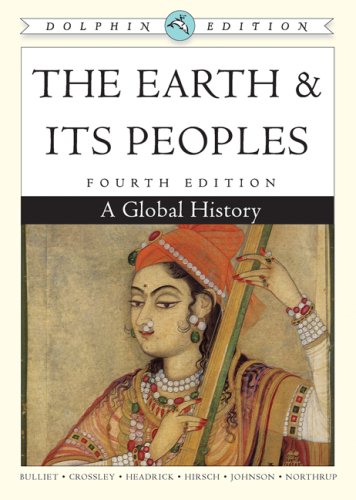 THE EARTH AND ITS PEOPLES was one of the first texts to present world history in a balanced, global framework, shifting the focus away from political centers of power. This truly global text for the world history survey course employs a fundamental theme--the interaction of human beings and the environment--to compare different times, places, and societies. Special emphasis is given to technology (in its broadest sense) and how technological development underlies all human activity. Highly acclaimed in their fields of study, the authors bring a wide array of expertise to the program. A combination of strong scholarship and detailed pedagogy gives the book its reputation for rigor and student accessibility. The Fourth Edition features extensive new coverage of world events, including globalization in the new millennium. Coverage of China has also been extensively reorganized and rewritten. The Dolphin Edition is available in the following split options: THE EARTH AND ITS PEOPLES Complete (Chapters 1-34), ISBN 0547149484; Volume I: To 1550 (Chapters 1-15), ISBN 0547149492; Volume II: Since 1500 (Chapters 16-34), ISBN 0547149522.

Richard W. Bulliet (PhD, Harvard University) is Professor of Middle Eastern History at Columbia University. He has written scholarly works on a number of topics: the social and economic history of medieval Iran (THE PATRICIANS OF NISHAPUR and COTTON, CLIMATE, AND CAMELS IN EARLY ISLAMIC IRAN), the history of human-animal relations (THE CAMEL AND THE WHEEL and HUNTERS, HERDERS, AND HAMBURGERS), the process of conversion to Islam (CONVERSION TO ISLAM IN THE MEDIEVAL PERIOD), and the overall course of Islamic social history (ISLAM: THE VIEW FROM THE EDGE and THE CASE FOR ISLAMO-CHRISTIAN CIVILIZATION). He is the editor of the COLUMBIA HISTORY OF THE TWENTIETH CENTURY. He has published four novels, coedited THE ENCYCLOPEDIA OF THE MODERN MIDDLE EAST, and hosted an educational television series on the Middle East. He was awarded a fellowship by the John Simon Guggenheim Memorial Foundation and was named a Carnegie Corporation Scholar.

Pamela Kyle Crossley received her Ph.D. in Modern Chinese History from Yale University. She is currently the Robert and Barbara Black Professor of History at Dartmouth College. Her books include THE WOBBLING PIVOT: AN INTERPRETIVE HISTORY OF CHINA SINCE 1800; WHAT IS GLOBAL HISTORY?; A TRANSLUCENT MIRROR: HISTORY AND IDENTITY IN QING IMPERIAL IDEOLOGY; THE MANCHUS; ORPHAN WARRIORS: THREE MANCHU GENERATIONS AND THE END OF THE QING WORLD; and (with Lynn Hollen Lees and John W. Servos) GLOBAL SOCIETY: THE WORLD SINCE 1900.

Daniel R. Headrick received his Ph.D. in History from Princeton University. Professor of History and Social Science, Emeritus, at Roosevelt University in Chicago, he is the author of several books on the history of technology, imperialism, and international relations, including THE TOOLS OF EMPIRE: TECHNOLOGY AND EUROPEAN IMPERIALISM IN THE NINETEENTH CENTURY; THE TENTACLES OF PROGRESS: TECHNOLOGY TRANSFER IN THE AGE OF IMPERIALISM; THE INVISIBLE WEAPON: TELECOMMUNICATIONS AND INTERNATIONAL POLITICS; TECHNOLOGY: A WORLD HISTORY; POWER OVER PEOPLES: TECHNOLOGY, ENVIRONMENTS AND WESTERN IMPERIALISM, 1400 TO THE PRESENT; and WHEN INFORMATION CAME OF AGE: TECHNOLOGIES OF KNOWLEDGE IN THE AGE OF REASON AND REVOLUTION, 1700-1850. His articles have appeared in the JOURNAL OF WORLD HISTORY and the JOURNAL OF MODERN HISTORY, and he has been awarded fellowships by the National Endowment for the Humanities, the John Simon Guggenheim Memorial Foundation, and the Alfred P. Sloan Foundation.

Steven W. Hirsch holds a Ph.D. in Classics from Stanford University and is currently Associate Professor of Classics and History at Tufts University. He has received grants from the National Endowment for the Humanities and the Massachusetts Foundation for Humanities and Public Policy. His research and publications include THE FRIENDSHIP OF THE BARBARIANS: XENOPHON AND THE PERSIAN EMPIRE, as well as articles and reviews in the CLASSICAL JOURNAL, the AMERICAN JOURNAL OF PHILOLOGY, and the JOURNAL OF INTERDISCIPLINARY HISTORY. He is currently working on a comparative study of ancient Mediterranean and Chinese civilizations.

Professor of History at the University of North Carolina at Charlotte, Lyman L. Johnson earned his Ph.D. in Latin American History from the University of Connecticut. A two-time Senior Fulbright-Hays Lecturer, he also has received fellowships from the Tinker Foundation, the Social Science Research Council, the National Endowment for the Humanities, and the American Philosophical Society. His recent books include DEATH, DISMEMBERMENT, AND MEMORY; THE FACES OF HONOR (with Sonya Lipsett-Rivera); THE PROBLEM OF ORDER IN CHANGING SOCIETIES; ESSAYS ON THE PRICE HISTORY OF EIGHTEENTH-CENTURY LATIN AMERICA (with Enrique Tandeter); and COLONIAL LATIN AMERICA (with Mark A. Burkholder). He also has published in journals, including the HISPANIC AMERICAN HISTORICAL REVIEW, the JOURNAL OF LATIN AMERICAN STUDIES, the INTERNATIONAL REVIEW OF SOCIAL HISTORY, SOCIAL HISTORY, and DESARROLLO ECONOMICO. He recently served as president of the Conference on Latin American History.

1. The Earth and Its Peoples: A Global History, Dolphin Edition

2. The Earth and Its Peoples: A Global History, Dolphin Edition

Book Description Cengage Learning, 2008. Condition: Good. A+ Customer service! Satisfaction Guaranteed! Book is in Used-Good condition. Pages and cover are clean and intact. Used items may not include supplementary materials such as CDs or access codes. May show signs of minor shelf wear and contain limited notes and highlighting. Seller Inventory # 0547149484-2-4

3. The Earth and Its Peoples: A Global History, Dolphin Edition