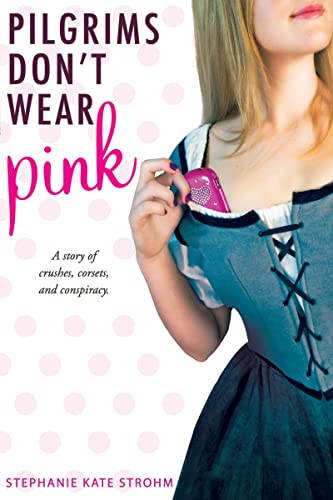 Libby Kelting had always felt herself born out of time. No wonder the historical romance-reading, Jane Austen-adaptation-watching, all-around history nerd jumped at the chance to intern at Camden Harbor, Maine’s Oldest Living History Museum. But at Camden Harbor Libby’s just plain out of place, no matter how cute she looks in a corset. Her cat-loving coworker wants her dead, the too-smart-for-his-own-good local reporter keeps pushing her buttons, her gorgeous sailor may be more shipwreck than dreamboat — plus Camden Harbor’s haunted. Over the course of one unforgettable summer, Libby learns that boys, like ghosts, aren’t always what they seem.

Like Libby Kelting, Stephanie Kate Strohm is a blond, history-loving gal with a passion for
fashion. She grew up in Connecticut and attended Middlebury College in Vermont, where she
was voted Winter Carnival Queen. Currently she lives in New York City with a huge shoe collection
and a little white dog named Lorelei Lee. This is her first novel.

"Please remind me again why you’re going to pilgrim camp."