Items related to The Birthday Ball 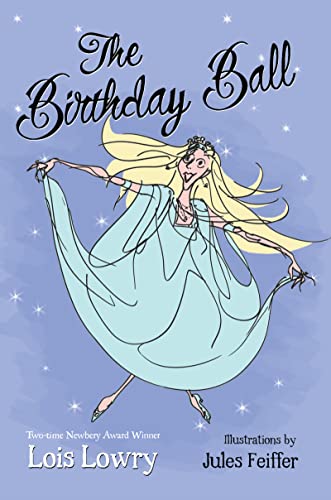 Princess Patricia Priscilla is bored with her royal life and the excitement surrounding her sixteenth birthday ball. Doomed to endure courtship by three grotesquely unappealing noblemen, she adopts a peasant disguise and escapes her fate—for a week.In this tale of mistaken identity, creamed pigeons, and young love, the two-time Newbery medalist Lois Lowry compares princesses to peasants and finds them to be exactly the same in all the important ways.

Product Description
Princess Patricia Priscilla is bored with her royal life and the excitement surrounding her sixteenth birthday ball. Doomed to endure courtship by three grotesquely unappealing noblemen, she escapes her fate--for a week. Disguised as a peasant, she attends the village school as the smart new girl, "Pat," and attracts friends and the attention of the handsome schoolmaster. Disgusting suitors, lovable peasants, and the clueless king and queen collide at the ball, where Princess Patricia Priscilla calls the shots. What began as a cure for boredom becomes a chance for Princess Patricia Priscilla to break the rules and marry the man she loves.

A Q&A with Lois Lowry, Author of The Birthday Ball


Q: In the book, Princess Patricia Priscilla disguises herself as a peasant to attend school. Have you ever gone anywhere incognito? A: Funny you asked! Back when I used to write for the Maine Times, I once took off my wedding ring and went to a singles dance. Such events were unusual back then--this would have been early 1970s. I remember meeting--and dancing with--a guy whose occupation was gravedigger. "That's seasonal work, of course," he said. Q: Many of your books end with people finding strength or love or hope in another human being. Do you set out to impart a message of kindness in your work? A: No, I never set out with anything. But when on my Facebook profile there was a place to fill in "Religion," I typed in "the Dalai Lama." I did so not because I am Buddhist--I'm not--but because I remembered reading that he once said "My religion is kindness." That seems the best sort of message, to me. Q: Your first book was published in 1977. How do you think publishing for young people has changed since then? And have you noticed a difference in how kids interact with authors and the kinds of questions they ask you? A: Writing for kids has become a very trendy occupation. Probably soon "children’s author" will replace "lawyer" as the answer to "What is virtually everybody becoming?" And so it is now a more competitive field, which is probably a good thing, because competition always raises the quality. But on the downside, it has become more commercial, I think, and sometimes less literary.
As far as kids' communication, in the early days it was handwritten, heartfelt letters. Now it is more often unpunctuated, school-assignment e-mails. With wonderful exceptions, of course. The covers of Lois Lowry's books often have interesting stories and personal connections to Lowry. Here she talks about a few: The Giver (1993):
I was doing a magazine article about Carl Nelson, a painter who lived on an island off the coast of Maine. By the time I wrote The Giver, he had died, but I had saved some of the photos I had done and used one the cover. Messenger (2004):
This features a wonderful boy named Jesse, fourteen years old when I photographed him, and growing his first mustache. He offered to shave but I told him he didn't need to; I shaved off his mustache with Photoshop. Number the Stars (1989):
The photograph on Number the Stars is of a family friend's daughter, taken originally as a portrait. Anna Katerina Johnson, who was ten when her parents hired me to photograph her in 1977, now has four children of her own. The Silent Boy (2003):
This cover photograph was taken by my grandmother's sister, Mary Fulton Boyd, in 1912. She grew up in Pennsylvania, and after college went to New York to study photography--such a bold step for a woman in that era! I always admired her, and she left me her photographs when she died. The Willoughbys (2008):
Illustrated by me!

Lois Lowry is the author of more than forty books for children and young adults, including the New York Times bestselling Giver Quartet and popular Anastasia Krupnik series. She has received countless honors, among them the Boston Globe-Horn Book Award, the Dorothy Canfield Fisher Award, the California Young Reader’s Medal, and the Mark Twain Award. She received Newbery Medals for two of her novels, Number the Stars and The Giver. Her first novel, A Summer to Die, was awarded the International Reading Association’s Children’s Book Award. Ms. Lowry lives in Maine.
www.loislowry.com
Twitter @LoisLowryWriter

Jules Feiffer's artistic sensibility permeates a wide range of creative work, from his Pulitzer-winning comic strip in the Village Voice, to his Obie Award-winning play Little Murders, to his Oscar-winning anti-military short subject animation, Munro, to his beloved illustrations for The Phantom Tollbooth. Feiffer’s cartoons have appeared in The New Yorker, Esquire, Playboy, and The Nation, and he was commissioned by The New York Times to create its first op-ed page comic strip which ran monthly until 2000, when Feiffer decided to start off the new millennium by giving up cartooning. Taking inspiration from his three daughters spanning three generations, he has reinvented himself as a children’s book author. His first book, The Man in the Ceiling, was selected by Publisher’s Weekly and the New York Public Library as one of the year’s best children’s books.

A former instructor at the Yale School of Drama and Northwestern University, Feiffer is now an adjunct professor at Southampton College, a member of the Dramatists Guild Council and has been elected to the American Academy of Arts and Letters. This is his first book with Houghton Mifflin.

Book Description Paperback. Condition: New. Paperback. Princess Patricia Priscilla's sixteenth birthday is in one week. That means she has seven days before her birthday ball, and seven days before the moment when she must select a suitor.Shipping may be from multiple locations in the US or from the UK, depending on stock availability. 186 pages. 0.172. Seller Inventory # 9780547577104