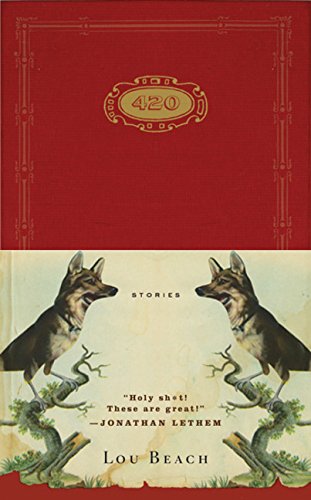 Within this collection of miniature stories, entire worlds take shape—some like our own, some hallucinatory fairylands--populated by heartsick cowboys, random criminals, lovers and drifters. In a dazzling narrative constellation, Beach’s characters contend with the strange and terrible and beautiful in life, and no outcome is certain. Begun as a series of Facebook status updates, 420 Characters marks a new turn in an acclaimed artist and illustrator’s career, and features original collages by the author.

Amazon Best Books of the Month, December 2011: Lou Beach takes the prize for best Facebook status update on nearly every page of 420 Characters. Most of us find it difficult to reduce the day’s events or our current emotional state to just 420 characters with spaces and punctuation, yet Beach manages to tell entire stories within these strict confines without losing anything you’d expect from a story with no character limit. These micro-stories range from funny to tragic to absurd, illustrated by Beach’s original artwork and collages. Taken separately, they’re the stories of dreams, both broken and realized; of relationships healthy and strange; of disillusionment and contentment. Taken together, they’re the story of life--or lives. Though there aren’t any overtly recurring characters, the stories still combine into a powerful cohesive whole that’s just as fun to read straight through as it is to read in chunks of 420 characters or less. --Malissa Kent

LOU BEACH's illustrations have appeared in numerous publications including Wired, The New Yorker, The New York Times Book Review, Harper's, and Time. He has designed album covers for Weather Report, the Neville Brothers, Blink 182, and many others. This is his first book of prose.