Items related to A Reporter's Lincoln (1916) 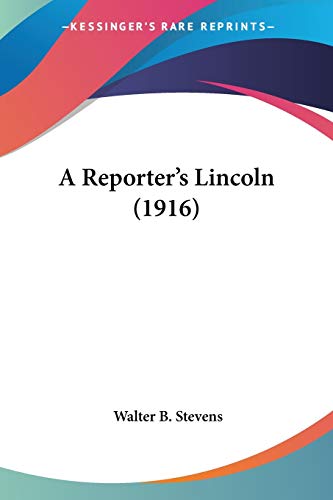 From 1886 to 1909, Walter B. Stevens, chief of the Washington bureau of the St. Louis Globe-Democrat, interviewed many people who had known Abraham Lincoln. As the centennial of Lincoln's birth approached, the Globe-Democrat assembled some of these materials for the series "Recollections of Lincoln", which appeared in early 1909. In 1916 about half of the "Recollections" articles appeared in A Reporter's Lincoln, published by the Missouri Historical Society. That work is reproduced here, supplemented by articles that were either omitted or only partially reproduced in the 1916 edition.

These little-known accounts flesh out the Lincoln record in a number of important ways. We find valuable new information on the Lincoln-Douglas debates and interesting testimony on Mary Todd Lincoln and Lincoln family traditions. The editor provides useful annotation on the identities of the informants and the likely veracity of the materials.

Stevens joined the St. Louis Globe-Democrat in 1881 and headed the paper's Washington bureau from 1884 to 1901.