Items related to Guardians Of The West (The Malloreon)

David Eddings Guardians Of The West (The Malloreon)

Guardians Of The West (The Malloreon) 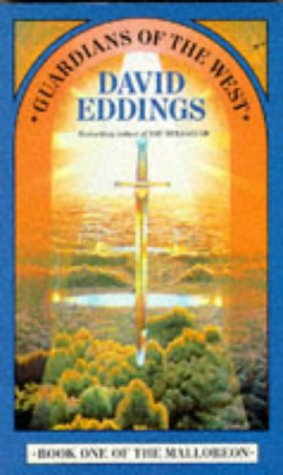 1997 Corgi MASS MARKET PAPERBACK, reprint. British import. David Eddings (The Belgariad Part Two: Castle of Wizardry / Enchanters' End Game). Garion, the King of Riva, finds himself caught between the Dark Prophecy and the Prophecy of Light when he searches a previously obscure part of the Mrin Codex to identify someone or something called Zandramas - Amazon

A sequel to THE BELGARIAD, Garion has slain the evil God Torak, and fulfilled the prophecy. But suddenly another prophecy is foretold. Again a great evil is brewing in the East. And again Garion finds himself caught between two ancient Prophecies, with the fate of the world resting on him....

David Eddings (1931-2009) published his first novel, High Hunt, in 1973, before turning to the field of fantasy with the Belgariad, soon followed by the Malloreon. Born in Spokane, Washington, and raised in the Puget Sound area north of Seattle, he received his Bachelor of Arts degree from Reed College in Portland, Oregon, in 1954, and a master of arts degree from the University of Washington in 1961. He served in the US Army, worked as a buyer for the Boeing Company, and was both a grocery clerk and a college English teacher. He lived in Nevada until his death, at the age of 77.

1. Guardians Of The West (The Malloreon)

2. Guardians of the West (The Malloreon)

Book Description Corgi, 1987. Paperback. Condition: New. Dispatched, from the UK, within 48 hours of ordering. This book is in Brand New condition. Aged book. Tanned pages and age spots, however, this will not interfere with reading. Seller Inventory # CHL5425213

Shipping: US$ 2.43
From United Kingdom to U.S.A.
Destination, rates & speeds

3. Guardians Of The West (The Malloreon) [Paperback] David Eddings