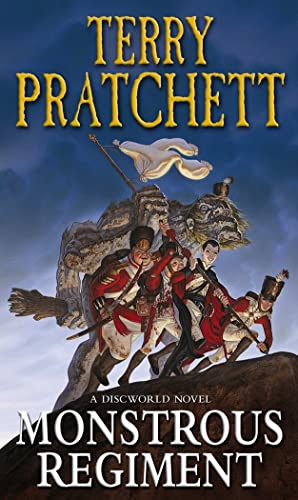 What do you get when you cross a vampire, a troll, Igor, a collection of misfits, and a young woman who shoves a pair of socks down her pants to join the army? The answer's simple. You have Monstrous Regiment, the characteristically charming novel by Terry Pratchett.

Polly becomes Private Oliver Perks, who is on a quest to find her older brother, who's recently MIA in one of the innumerable wars the tiny nation of Borogravia has a habit of starting with its neighbors. This peevish tendency has all but expended Borogravia's ranks of cannon fodder. Whether Sergeant Jackrum knows her secret or not, he can't afford to be choosy, as Perks and her/his comrades are among the last able-bodied recruits left in Borogravia. This collection of misfits includes the aforementioned vampire (reformed and off the blood, thank you), troll, and macabre Igor, who is only too happy to sew you a new leg if you aren't too particular about previous ownership. Off to war, Polly/Oliver learns that having a pair of, um, socks is a good way to open up doors in this man's army.

For those who haven't made this underrated author's acquaintance, Monstrous Regiment is as good a place to start as any. Readers will encounter Pratchett's subtle and disarming wit, his trademark footnoted asides along with a not-too-shabby tale of honor, courage, and duty in the face of absurd circumstances. --Jeremy Pugh

Sir Terry Pratchett, OBE, was the author of more than 70 books, including the internationally bestselling Discworld series of novels. His books have been adapted for stage and screen, and he was the winner of multiple prizes, including the Carnegie Medal. In January 2009, Pratchett was knighted by Queen Elizabeth II in recognition of his services to literature. Sir Terry, who lived in England, died in March 2015 at the age of 66.

Book Description Corgi Aug 2004, 2004. Taschenbuch. Condition: Neu. Neuware - It began as a sudden strange fancy . . . Polly Perks had to become a boy in a hurry. Cutting off her hair and wearing trousers was easy. Learning to fart and belch in public and walk like an ape took more time . . . And now she's enlisted in the army, and searching for her lost brother. But there's a war on. There's always a war on. And Polly and her fellow recruits are suddenly in the thick of it, without any training, and the enemy is hunting them. All they have on their side is the most artful sergeant in the army and a vampire with a lust for coffee. Well . . . They have the Secret. And as they take the war to the heart of the enemy, they have to use all the resources of . . . the Monstrous Regiment. 496 pp. Englisch. Seller Inventory # 9780552149419