Items related to The Wit & Wisdom of Discworld

The Wit & Wisdom of Discworld 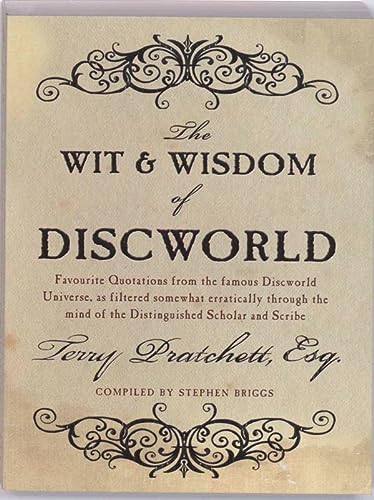 The perfect book for die-hard Pratchett fans and newcomers alike, a collection of the wittiest, pithiest and wisest quotations from the Discworld universe, organized into categories including the principal Discworld characters (Granny Weatherwax, Lord Vetinari), places (Unseen University, Ankh-Morpork, the City Watch) or even the occasionally concept (magic).
From the Hardcover edition.

About the Author:
Stephen Briggs has adapted a number of the Discworld novels for the theatre, as well as collaborating with Terry Pratchett on various books including Nanny Ogg’s Cookbook, Death’s Domain and The Streets of Ankh-Morpork.
From the Hardcover edition.
Excerpt. © Reprinted by permission. All rights reserved.:
THE COLOUR OF MAGIC

‘—just not very long.’
From the Hardcover edition.

The Wit & Wisdom of Discworld