Items related to Dauntless: Novel of Midway and Guadalcanal

Dauntless: Novel of Midway and Guadalcanal 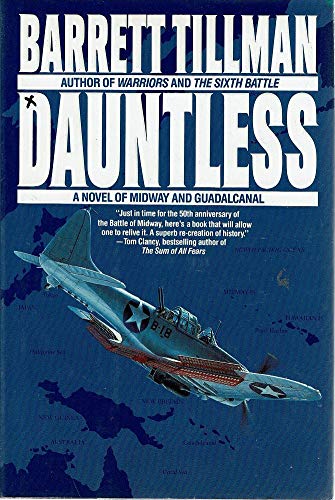 Lt. Phil "Buck" Rogers and his comrades pilot untested dive bombers from the deck of the U.S.S. Yorktown, battling the Japanese in the conflicts at Midway and Guadalcanal

The 50th anniversary of WW II will undoubtedly unleash a spate of books over the next few years, and this fictionalized version of the crucial Battle of Midway in the summer of 1942 is in the vanguard. Turning back the Japanese at Midway was the first indication that the US could survive the Pacific onslaught, and thus was arguably a major turning point in the war. Tillman (Warriors, 1990) shows clearly how the advent of the SBD-3 Dauntless dive bombers played a large part in this crucial face-off. But there's also that familiar flaw of war novels--a clich‚d cast. They're all here: the scared but spunky young pilots who turn out to have the ``right stuff''; the grizzled engineers and mechanics who can patch together planes and ships no matter what the enemy throws at them; the good old boys who don't let military rank separate them from their native charm; the plucky girls they left behind. There is even an almost likable Japanese flier who's a big fan of Carmen Miranda's, just to humanize the enemy a bit. The focus here is on Lt. Phil (Buck) Rogers, lovely librarian Sallyann Downey (who learns that sometimes the enemy wears a US uniform when she is almost raped), and a host of other good men, both fictional and real, who turned back the Japanese and changed the course of the war. Tillman's training and experience assure verisimilitude in both history and technical details, to be sure--but the strangely uninvolving fashion in which he tells his tale makes this one for dedicated aviation-war buffs. -- Copyright ©1992, Kirkus Associates, LP. All rights reserved.

The hero of this impressive retro-techno-thriller, too, is an airplane. Douglas Dauntless dive-bombers turned the tide of the Pacific War by sinking four Japanese carriers at Midway, and played a crucial role in the Guadalcanal campaign. Tillman, a veteran writer of air fiction ( Warriors ) and nonfiction ( On Yankee Station ), reconstructs the details of carrier war accurately and convincingly: the ready rooms, the flight deck, the cockpits. The sinking of the Yorktown by a Japanese submarine, and the murder of a U.S. pilot by his captors, stand out as particularly effective episodes. Tillman can create characters as well: maverick Japanese pilot Hiroyoshi Sakuda, Navy ensign Phil Rogers, Marine lieutenant Jim Carpenter and other characters are true to their respective types, and so smoothly integrated with historical figures (Commander Max Leslie, Admiral Chester Nimitz) that it is sometimes difficult to distinguish Tillman's creations from the real people. Rogers' refreshing romance with Honolulu librarian Sallyann Downey follows the amorous conventions of 1940s rather than those of a steamier and more liberated era. And yet Dauntless suffers from trying to do too much in its pages. The novel's many secondary characters, together with its kaleidoscopic shifts from scene to scene, make the story line hard for civilian readers to follow. That reservation aside, Tillman here treats a crucial period of WW II in exciting fashion.
Copyright 1992 Reed Business Information, Inc.

1. Dauntless: Novel of Midway and Guadalcanal

2. Dauntless: Novel of Midway and Guadalcanal

3. Dauntless: Novel of Midway and Guadalcanal

4. Dauntless: Novel of Midway and Guadalcanal

5. Dauntless: Novel of Midway and Guadalcanal