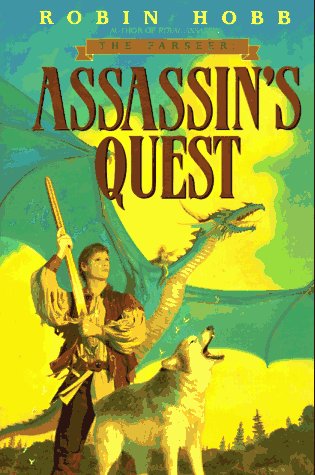 As this epic trilogy reaches its unforgettable conclusion, young FitzChivalry faces his toughest opponent ever: himself. Embittered and broken, his body reclaimed from the grave and his spirit from the care of his bond-wolf Nighteyes, Fitz awakens to a world where everything he once held dear is in ruins. King Shrewd is dead; Prince Regal has claimed the throne and rules the kingdom with a cruel and selfish negligence. Molly has deserted him for parts unknown. Queen Kettricken and her unborn child have fled to the mountains with the Fool, Verity is lost seeking the elusive Elderlings, and Fitz's presumed death forever bars him from Buckkeep. The only companions he had left in his solitude are Chade and Burrich, who wrestle him reluctantly back to humanity after his sojourn in Nighteyes' mind.
But angry with the lot Fate has cast him, Fitz drives away even these loyal companions, and for the first time faces his life on his own, without anyone to guide or lead him. And what he most desires is revenge against Regal, for everything the usurper has cost him. So, preparing his assassin's kit, he sets out for Regal's new capital at Tradeford, determined to murder the treacherous "king." Without guidance, though, he botches the attempt, and an urgent sending by Verity to save him leaves Fitz imprinted with the burning imperative to find and aid his true king in his quest to aid the land.
Eventually fighting his way through to the mountains, he rejoins Kettricken and the Fool in a quest for Verity--and there in the Skill-shadowed hills, he discovers an ancient power and a mysterious riddle, whose answer may well change the fate of the Six Duchies forever....

"With shimmering language and the alluring garb of Faerie, Hobb concludes her Farseer trilogy with this immense coming-of-age novel." --Publishers Weekly

Robin Hobb is the author of the Farseer Trilogy and the Liveship Traders Trilogy. She has also written as Megan Lindholm. She is a native of Washington State.