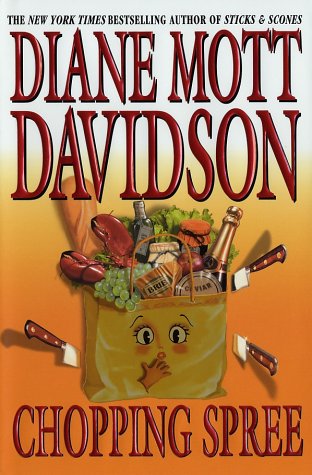 New York Times bestselling author Diane Mott Davidson has prepared another irresistibly tempting tale spiced with mystery and mayhem, as caterer-turned-sleuth Goldy Schulz finds herself in hot water when she sets out to catch a killer with a secret recipe for murder.
Chopping Spree

For Colorado caterer Goldy Schulz, business isn’t just booming--it’s skyrocketing. But as her friend Marla is constantly warning her, “Success can kill you.” Goldy knows she needs to slow down before she breaks down, and she vows she’ll do it--right after her next booking: a cocktail party for the Westside Mall’s Elite Shoppers Club.

It’s the event of the shopping season: the Princess Without a Pricetag party for the wealthy shopaholics who drop at least a thousand dollars a week at the mall. Goldy has been hired by charming mall manager Barry Dean to cater the jewel-encrusted affair. But she has hardly begun setting up when she finds herself in the path of a truck that has no intention of stopping until both she and Barry are crushed beneath it. Muddied, bruised, embarrassed, but determined to do her job, Goldy manages to get the party started on time with the help of her trusted assistants Julian Teller and Liz Fury.

But with the outbreak of an ugly marital spat among the guests, the behavior of Barry’s flighty young girlfriend, and Barry’s own strange actions after the truck incident, the event is--by Goldy’s standards--a catastrophe. And it’s about to get worse. When she goes to pick up her check, she finds an old friend lying dead in a pile of sale shoes--stabbed with one of Goldy’s new knives. Hours later, Julian is the prime suspect in the murder.To prove Julian’s innocence, Goldy must catch the real killer. But to do that, she will have to figure out why the victim was carrying a powerful narcotic. And why was a private investigator called in shortly before the murder? Was the killer connected to a mall renovation project--or the eviction of a disgruntled tenant? Or was the villain the odd lover out in a violent love triangle?

Between whipping up Sweethearts’ Swedish Meatballs, Quiche Me Quick, and Diamond Lovers’ Hot Crab Dip, and digging up clues, Goldy knows this is going to be one tough case to crack. And her gourmet sleuth’s instinct tells her that the final course will be a real killer.

When Colorado caterer Goldy Schulz is hired by her old friend Barry Dean to provide a lavish buffet for the opening of his chic new Aspen Meadows mall, the last thing she expects to stumble over is Barry himself, stabbed to death with one of her very own carving knives. When the police arrest her assistant, Julian, for the murder, Goldy launches her own over-caffeinated investigation. There's enough espresso in this culinary cozy to keep the reader wide awake while Davidson's irrepressible heroine sets up the suspects, solves the mystery, sends up a Shopaholics Anonymous meeting, and dishes up 10 recipes for fabulous party food, including the Chopping Spree salad of the title. The plot's somewhat creaky and there's hardly any dramatic tension, but fans of this popular series won't mind a bit. --Jane Adams

“The suspense factor rises higher than a champagne soufflé. Warning: With Goldy sharing her recipes...you may want to pull your reading chair up next to the oven.”
--People

“A cross between Mary Higgins Clark and Betty Crocker!”
--The Sun, Baltimore

“You don’t have to be a cook or a mystery fan to love Diane Mott Davidson’s books. But if you’re either--or both--her tempting recipes and elaborate plots add up to a literary feast!”
--The San Diego Union-Tribune

Book Description Bantam, 2002. Hardcover. Condition: New. First Edition. New Book with Dust Jacket. Purchased from Sale Table at local book retailer(all new books). I have examined all aspects of this volume and find no flaws whatsoever. (Note:Your Satisfaction is Guaranteed. If you are not completely happy, we will refund your money immediately.no questions asked. Books purchased before 11am EST normally shipped same day.). Seller Inventory # SHLF0201xx0034

Book Description Bantam, 2002. Hardcover. Condition: New. Dust Jacket Condition: New. 1st Edition. SIGNED & DATED 7/9/02 ON THE TITLE PAGE BY DIANE MOTT DAVIDSON. FIRST EDITION/FIRST PRINTING with a complete number line beginning in 1. A PRISTINE copy of this book in New and Unread Condition. The book itself is tight, crisp and square. No defects, not remainder marked or price-clipped, DJ now in protective Brodart cover. PHOTOS OF THE ACTUAL BOOK SENT UPON REQUEST. THIS IS AN INTRODUCTORY PRICE FOR OUR GRAND RE-OPENING. ALL PRICES WILL BE ADJUSTED IN FEBRUARY TO REFLECT MARKET PRICES. Signed by Author(s). Seller Inventory # 000456