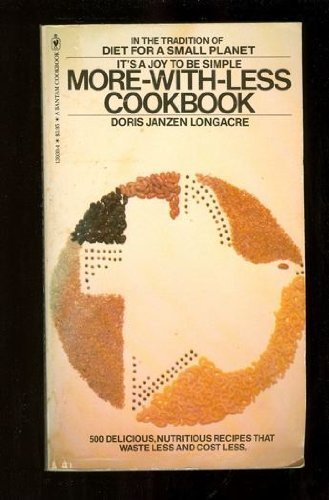 Longacre has gathered 500 recipes from Mennonite kitchens that tell us how to eat better and consume less of the world's limited food resources. All recipes have been tested by professional home economists. This cookbook is written for those who care about their own health and the food needs of others in the world.

Doris Janzen Longacre was associated with Mennonite Central Committee and its worldwide ministries in the name of Christ.
She grew up in Elbing, Kansas, and Tucson, Arizona. She attended Bethel College in North Newton, Kansas, received her BA in home economics from Goshen (Ind.) College in 1961, and studied at Goshen Biblical Seminary.
Doris served as dietician of Hesston (Kan.) College (1961-63), as MCC hostess of the Language Study Center in Vietnam (1964-67), and in another MCC assignment in Indonesia (1971-72).
She was congregational chair at Akron (Pa.) Mennonite Church (1973-76), board member for Goshen Biblical Seminary (1976-79), and a frequent speaker and workshop leader at church conferences in Canada and the United States.
Doris lived in Akron, Pennsylvania, and was married to Paul Longacre. Their two daughters are Cara Longacre Hurst and Marta van Zanten.
In 1979, just prior to the completion of her second book Living More with Less Doris passed away at age 39 after a 31-month battle with cancer.
She once said, I have always liked to cook, particularly experimenting, developing a recipe. I seldom make a recipe twice the same way. I also find satisfaction in cooking and serving foods from other countries.

This is not only a fabulous cookbook that has helped thousands of families establish a climate of joy and concern for others at mealtime, it can help you improve your nutrition and save money, too. It outlines three ways to eat more-with-less and invites us to consider the global implications of our dietary choices. There are sidebars with stories, pictures, prayers and verses, making this truly a distinctively Christian cookbook, solid with great recipes, and wholesome, faithful ideas scattered through-out. We have some friends that have literally worn out several of these, as they are truly that useful---with simple, helpful stuff about complimentary proteins and ways to create meals that respect what is now called sustainable agriculture. As it says on the back, these recipes are kind to your wallet, your waistline, and the larger world. Three cheers for the Mennonite Central Committee and their good work bringing global concerns to the table in such a refreshing, pleasant way. 500 recipes!