Items related to The Garden of Rama

The Garden of Rama 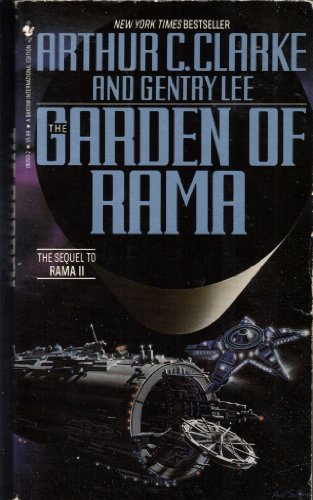 In the spellbinding Arthur C. Clarke tradition, here is an exhilarating adventure into the hearts of both the Universe and mankind...

By the twenty-third century Earth has already had two encounters with massive, mysterious robotic spacecraft from beyond our solar system--the incontestable proof of an alien technology that far exceeds our own. Now three human cosmonauts are trapped aboard a labyrinthine Raman vessel, where it will take all of their physical and mental resources to surviv. Only twelve years into their journey do these intrepid travelers learn their destination and face their ultimate challenge: a rendevous with a Raman base--and the unseen architects of their galactic home. The cosmonauts have given up family, friends, and possessions to live a new kind of life. But the answers that await them at the Raman Node will require an even greater sacrifice--if humanity is indeed ready to learn the awe-inspiring truth.

Arthur C. Clarke has long been considered the greatest science fiction writer of all time and was an international treasure in many other ways, including the fact that an article by him in 1945 led to the invention of satellite technology. Books by Clarke—both fiction and nonfiction—have sold more than one hundred million copies worldwide. He died in 2008.

Picking up where Rama II (1989) left off, this latest effort from Clarke and Lee is as disappointing as their others. Nicole, Richard and Michael--the three cosmonauts trapped on the Rama II ship as it headed out of our solar system--muddle along together as the ship accelerates toward Sirius. After a 12-year trip, during which Nicole bears five children, the family arrives at the Node, a giant space station where they undergo extensive tests before being sent back to Earth in a refurbished Rama vessel with accommodations for 2000 human specimens. The Rama colony is established with remarkably little strife, but as the new Rama departs our system again, an unpleasant criminal element arises to challenge Nicole's peaceful, enlightened leadership. The turgid pace and lengthy digressive lumps make this installment a chore to read, and Nicole's unflagging pious virtue is an endless irritation. Worse, there is an utter lack of traditional sf strengths: the people, cultures, and habits of this 23rd century are hardly different from our own--instead, the authors settle for unsubtle parallels to modern perils such as AIDS, ecological disaster, and totalitarian repression--and all of the speculative concepts are shopworn. Crude attempts to jumpstart the reader's sense of wonder with repeated insistence that the characters are awed, amazed, and overwhelmed by the rather routine vistas they encounter serve only to underline the lack of the genuine goods here. -- Copyright ©1991, Kirkus Associates, LP. All rights reserved.

1. The Garden of Rama

2. The Garden of Rama

3. The Garden of Rama Arthur C. Clarke and Gentry Lee