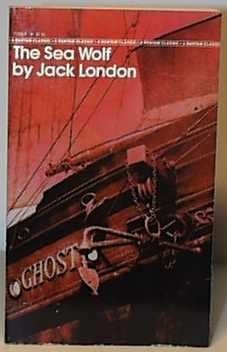 Jack London's classic tale, "The Sea-Wolf" is a story of a man who survives an ocean collision, and comes under the dominance of Wolf Larsen, the sea captain who rescued him.

A thrilling epic of a sea voyage and a complex novel of ideas, The Sea-Wolf is a standard-bearer of its genre. It is the vivid story of a gentleman scholar, Humphrey Van Weyden, who is rescued by a seal-hunting schooner after a ferryboat accident in San Francisco Bay. London uses Van Weyden's ordeal at the hands of a schooner's devious crew to explore powerful themes of ambition, courage, and the innate will to survive. The Sea-Wolf also introduces Jack London's most memorable, fully realized character, Wolf Larsen, the schooner's brutal captain, who ruthlessly crushes anyone standing in his way. As Gary Kinder states in his Introduction, "Wolf Larsen is one of the most carefully carved characters in American literature....London, himself, seems as fascinated as the reader with his own creation."

Book Description Random House Publishing Group. Mass Market Paperback. Condition: Very Good. A copy that has been read, but remains in excellent condition. Pages are intact and are not marred by notes or highlighting, but may contain a neat previous owner name. The spine remains undamaged. At ThriftBooks, our motto is: Read More, Spend Less. Seller Inventory # G0553211617I4N00

Book Description Random House Publishing Group. Mass Market Paperback. Condition: As New. An apparently unread copy in perfect condition. Dust cover is intact; pages are clean and are not marred by notes or folds of any kind. At ThriftBooks, our motto is: Read More, Spend Less. Seller Inventory # G0553211617I2N00

Book Description Bantam Books, 1981. Condition: Good. A+ Customer service! Satisfaction Guaranteed! Book is in Used-Good condition. Pages and cover are clean and intact. Used items may not include supplementary materials such as CDs or access codes. May show signs of minor shelf wear and contain limited notes and highlighting. Seller Inventory # 0553211617-2-4