Items related to Call for the Dead

Call for the Dead 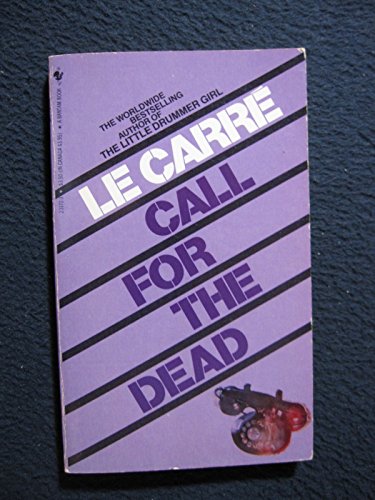 Why should a routine security check drive Fennan to suicide? Why should a suicide arrange for a GPO alarm call? Le Carre's debut novel blends murder investigation with a spy story.

With the incomparable opening chapter of Call for the Dead, titled "A Brief History of George Smiley," John Le Carré introduces his legendary spy and immediately ensnares you in the shadowy world Smiley inhabits.

Pulled back from overseas duty during World War II, Smiley was redirected to face the threats of the Cold War. He had been asked to interview Samuel Fennan of the Foreign Office after an anonymous letter accused Fennan of Communist Party membership. Smiley's report cleared him of the allegations, so he was stunned to learn that Fennan had died the day after the interview, leaving a suicide note that claimed his career had been ruined. Investigating circumstances that make no sense to him, Smiley gradually uncovers a spy ring and in so doing is led into a lethal duel of wits with the best of his war-time pupils.

Call for the Dead marks the beginning of John Le Carré's brilliant literary career, just as it launches the life of one of the most memorable fictional characters of the twentieth century.

John Le Carré is the author of The Spy Who Came In from the Cold; Tinker, Tailor, Soldier, Spy; Smiley's People; The Tailor of Panama; The Constant Gardener; and many other best-selling titles, including this most recent novel, Absolute Friends. He lives in Cornwall, England.

Praise for Call for the Dead

"A finely wrought and compelling admixture of three types of crime writing: the novel of action and excitement that we commonly call a thriller, the spy story, and the detective story."-- P. D. James, from the Foreword

"A subtle and acute story of counter-espionage marked by restraint, indirection, and intelligence."-- The New York Times Book Review

"Le Carré is more than just a great storyteller-- he captures the Zeitgeist itself."-- Tom Wolfe

"No other contemporary novelist has more durably enjoyed the twin badges of being both well-read and well-regarded."-- Scott Turow

"He is one of the half-dozen best novelists now working in English."-- Chicago Sun-Times

"Le Carré is one of the best novelists-- of any kind-- we have."-- Vanity Fair

"A brilliant linguistic artist with a keen eye for the exotic and not-so-exotic locale, a crafty, moralizer with an occasional bent for sentiment."-- The Wall Street Journal