Items related to Deserted Cities of the Heart

Deserted Cities of the Heart 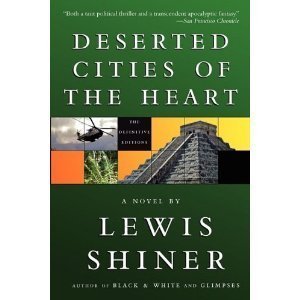 The jungles and cities of contemporary Mexico are the setting for this novel of revolution and the apocalypse, and of a shattering odyssey into the Mayan underworld

Shiner begins this novel realistically in a contemporary Mexico where Rolling Stone reporter John Carmichael has been drawn in his search for news, and anthropologist Thomas Yates has come to search for his missing brother, rock musician Eddie. Eventually, they meet among the ancient Mayan ruins where Eddie has gone on a pilgrimage with the Mayan descendants among whom he now lives. There, while trapped between Cuban backed insurgents and a clandestine American force, Eddie pursues his experiments with mushrooms. He claims that instead of psychedelic visions, they actually transport him back in time to his own past and to the great days of Mayan culture. Although well written and occasionally thoughtful, the narrative, whose opening reminds one of warmed-over Robert Stone, moves to fulfill the cliched apocalyptic aspirations of the title.
Copyright 1988 Reed Business Information, Inc.

An anthropologist and his alienated brother reunite in a Mexico torn apart by earthquakes and revolution to reenact an ancient Mayan myth of the end of the world in this surrealistic fantasy by the author of Frontera . Shiner captures the complexities of both modern and ancient reality in a story that should appeal to general as well as fantasy audiences. Recommended. JC
Copyright 1988 Reed Business Information, Inc.

1. Deserted Cities of the Heart