Items related to F Is for Fugitive (Kinsey Millhone Mysteries) 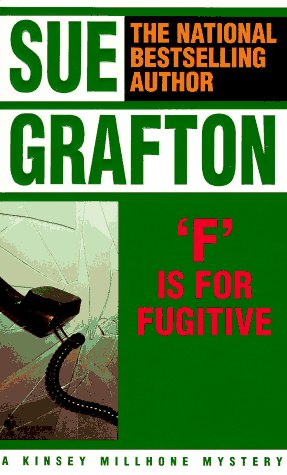 #1 New York Times bestselling author Sue Grafton crafts a thriller set in a town so small that P.I. Kinsey Millhone wonders just how private her investigation can be...

F IS FOR FLIGHT
When Kinsey Millhone first arrives in Floral Beach, California, it's hard for her to picture the idyllic coastal town as the setting of a brutal murder. Seventeen years ago, the body of Jean Timberlake―a troubled teen who had a reputation with the boys―was found on the beach. Her boyfriend Bailey Fowler was convicted of her murder and imprisoned, but he escaped.

F IS FOR FEAR
After all this time, Bailey's finally been captured. Believing in his son's innocence, Bailey's father wants Kinsey to find Jean's real killer. But most of the residents in this tight-knit community are convinced Bailey strangled Jean. So why are they so reluctant to answer Kinsey's questions? If there's one thing Kinsey's got plenty of it's persistence. And that's exactly what it's going to take to crack the lid on this case.

F IS FOR FUGITIVE
As Kinsey gets closer to solving Jean's murder, the more dirty little secrets she uncovers in a town where everyone has something to hide―and a killer will kill again to keep the past buried...

"With this complex mystery and her ever-deeper glimpses into its heroine, Grafton's series promises to hold readers all the way to Z."
--Publishers Weekly

Sue Grafton spends part of the year in Kentucky and the rest in California. All of her Alphabet Mysteries are available from Random House AudioBooks, read by Judy Kaye.

About the Reader
Judy Kaye has appeared on Broadway in Oh Brother, Grease, and On the Twentieth Century, and won the Tony Award for her performance in The Phantom of the Opera. She also created the role of Emma Goldman in Ragtime.

1. F Is for Fugitive

2. F Is for Fugitive Grafton, Sue