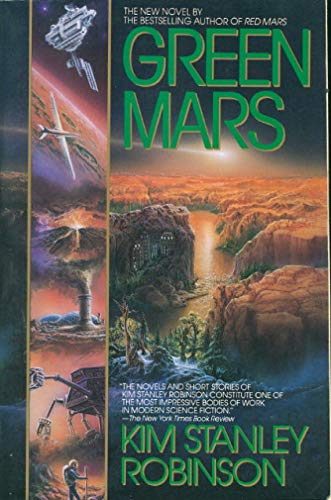 In the sequel to Red Mars, as colonists begin to transform Mars into a livable, Earth-like planet, tensions erupt between those who would alter the planet into a paradise for humanity and those who wish to preserve the planet's harsh, barren beauty. Simultaneous.

Kim Stanley Robinson has earned a reputation as the master of Mars fiction, writing books that are scientific, sociological and, best yet, fantastic. Green Mars continues the story of humans settling the planet in a process called "terraforming." In Red Mars, the initial work in the trilogy, the first 100 scientists chosen to explore the planet disintegrated in disagreement--in part because of pressures from forces on Earth. Some of the scientists formed a loose network underground. Green Mars, which won the 1994 Hugo Award, follows the development of the underground and the problems endemic to forming a new society.

In the "Nebula Award winning Red Mars, Kim Stanley Robinson began his critically acclaimed epic saga of the colonization of Mars, Now the "Hugo Award winning Green Mars continues the thrilling and timeless tale of humanity's struggle to survive at its farthest frontier.
Nearly a generation has passed since the first pioneers landed, but the transformation of Mars to an Earthlike planet has just begun The plan is opposed by those determined to preserve the planets hostile, barren beauty. Led by rebels like Peter Clayborne, these young people are the first generation of children born on Mars. They will be joined by original settlers Maya Toitovna, Simon Frasier, and Sax Russell. Against this cosmic backdrop, passions, rivalries, and friendships explode in a story as spectacular as the planet itself.